Commodity Currencies continue to take their cues from commodities (makes sense), and today are seeing multi-month highs. NZD/USD, USD/CAD, & AUD/USD all hit 10+ month highs as the US Dollar pressed further down into new 2016 lows. What amazes many people is that all of this is happening after a weekend where supposedly bad news happened in Doha.

On Tuesday morning, we heard from Bank of Canada Governor, Stephen Poloz, who sounded cautious regarding CAD strength. In his speech, interestingly, Poloz noted that CAD strength is less a Canadian story, and more of a Global Macro story, where risk assets like commodities are all being bid-up, and in turn, a turn lower in the US Dollar is developing. A weaker US Dollar currently is playing well into this USD/CAD downtrend that was affirmed on the break below and hold of the 34-day moving average (shown in the chart below).

On the chart above, the four-hour Ichimoku cloud allows you to see resistance that has not been worth fighting aggressively. The term “sell the rip”, does a fine job of encapsulating the environment we’re in where strength has been short-term and simply provides more attractive levels to sell as opposed to signs of a reversal.

Regarding resistance, we recently pivoted from 1.3000, which not only is a nice round figure but is also the top of the Ichimoku Cloud. Above 1.3000, when we get a break above there (when, who knows?), the next level of focus will be at 1.3217, which was the April opening range high, and the corrective top of a three-wave move that eventually led to an impulsive decline that we’re in right now. From this morning’s low, we’ve seen a fall of 0.0587 or 587 pips. In between the 1.3000 level and 1.3217 lies the 34-day moving average (shown in the chart above) at 1.3087 that has also acted as resistance on the significant move lower.

Given the strength of the trend, recognizing support seems like more of a formality. This is because most firm levels of support have been aggressively broken. The next levels of support I’m watching are the June 01 high at 1.2561 and the June 18 low and 50% retracement of the 2012-2016 range of 1.2160/26. In 64 days, marking the 2016 high of January 20, USD/CAD has reversed 2,060 pips so saying something needs to slow down or reverse course is too subjective for my taste. Furthermore, a break below the two support levels would turn attention to the May low of 1.19186.

When looking at sentiment, crowd positioning has continued to fight the trend aggressively providing a favor for more downside. We use our Speculative Sentiment Index as a contrarian indicator to price action, and the fact that the majority of traders are net-long at a bull: bear of 1.74 as 64% of traders are long means that a bearish USD/CAD signal is currently at play. This signal has been working itself out since late January. Now that the price has broken below the April opening range low and the long-term 38.2% retracement level, we’ll continue to favor trend continuation toward the June 1 high. A break below these new key support metrics and a move further into positive territory on the SSI would favor further downside towards downside targets mentioned above. 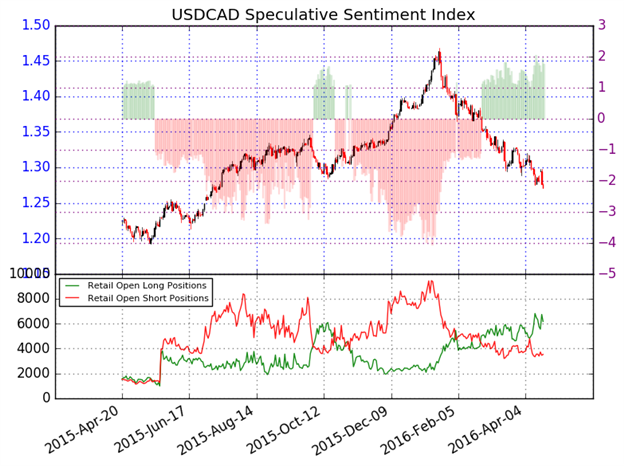