Now that we know there was no deal in Doha for a collaborative production cut, though a freeze at January levels was partially agreed to, Oil investors and traders are wondering what’s next. Early in the week, we have seen a clear sign the Oil bears, those with short positions on, are not overly confident to the point of loading into the position. Not only have we seen further US Dollar weakness, which is inversely correlated to the price of WTI Crude Oil, but we’re seeing the price stick around the 200-DMA.

The 200-DMA, yellow line on the chart below, has been firm resistance since the bear market in Oil really took hold in H2 2014. The price of WTI Crude Oil came up to the 200-DMA twice in 2015 but was quickly rejected. Now, we’re seeing price sticking around the level while even briefly poking its head above the long-term moving average last week before Doha fears began to take over.

Beyond the 200-DMA, traders and Oil investors can look to the recent higher low of $35.22/barrel. If price can remain above this level, and in so doing, form a bullish hammer candle around the 200-DMA, the technical argument for being bearish now is becoming much more difficult.

The above chart is a long-term price channel via Andrew’s Pitchfork tool with sliding parallels drawn with the slope of the median line off of key pivots. You’ll notice on the bottom-right of the chart; the sliding parallels acted as key pivot support zones in Q2 2015 & Q1 2016. Now, we have now seen a break above the 200-DMA, which turns focus higher into the next two Fibonacci extensions of $44/58 per bbl.

Now that we’ve seen Bullish momentum building on US Oil, we can look to other influencing factors to see if the proverbial market wind is at the back of the Bulls. First, a weak Dollar would go a long way in helping the price of Oil recover further, and second the median line on the chart below acting as support, would also help to validate that a behavior shift is underway. If a behavior shift is underway, it’s advisable not to stand in the way.

Contrarian System Warns of a Test of Resistance 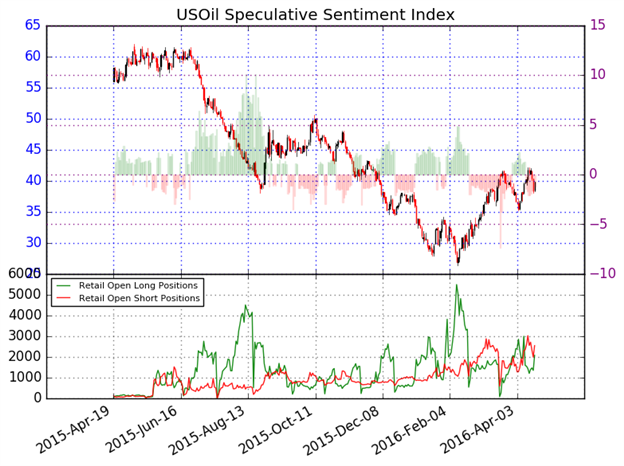 In addition to the technical focus around Andrew’s Pitchfork, the sliding parallels, and the Intermarket relationship of US Dollar weakness, we should keep an eye on retail sentiment, which could be warning us of more upside price action, which would align with our Speculative Sentiment Index or SSI.

According to client positions at FXCM, the ratio of long to short positions in the US Oil stands at -1.23 as 45% of traders are long. Open interest is 17.2% higher than yesterday and 24.0% above its monthly average. We use our SSI as a contrarian indicator to price action, and the fact that the majority of traders are short gives a signal that the WTI Crude Oil may continue higher. If the trading crowd grows further net-short, we could be in the works of an upside extension to the upper half of $40/bbl.