As the week opens, USD/JPY may be in the process of carving out a bottom. Of course, it is too early to tell if that is the case. For now, the critical 161.8% Fibonacci Extension of the May top-August Low-November-Lower-High looks to be very important support. So far, we’ve attempted, yet failed, to see a push below the 107.93 level. Now, our attention should be, and is, focus on prior resistance to see if we can get an aggressive move in the opposite direction to the 2016 trend.

The key zone of resistance starts at last week’s high, 109.73, up to the March 17 low, 110.65. A break above there could bring about a slingshot move higher to prior resistance around 114/15. However, the weak US Dollar is still a key theme that should be considered. Therefore, the weak JPY part of the story still need to be proven with a breaking of USD/JPY resistance.

If we fail to see a break above the key resistance level of 109.73-110.65, such a lack of strength will favor an eventual drop to the double-top target, which aligns with a recent Analyst Pick. For 2016, the current zone of 110-111 have been appropriate levels to be on the lookout for holding and so far they have.

However, April has begun to make a strong claim that the macro market environment does not favor the JPY appreciation that we’ve recently seen.

The JPY has had a rather reliable correlation since finding an apparently significant top in late 2011. When the JPY is strong, the risktone in global macro markets appears to be soft. When the JPY is weak, there is a nearly palpable bid for risky assets. The logicbehind this aligns with the carry trade where cash-rich, yet interest-rate poor countries like Japan send convert/ sell their home currencies for assets denominated in other currencies offshoreto secure alpha.

However, that trend has been blatantly absent in 2016. Many global indices have been overly resilientsince late January/ early February while at the same time, the JPY has been surprisingly strong. The recent bout of JPY strength came in the aftermath of the negative interest rate announcement by the Bank of Japan.

Combining technical signals with fundamental events should encourage a trader to keep their eye on the January 29 high in the Japanese Nikkei (CFD: JPN225). The high on the announcement of negative interest rates in Japan was 17,897.50. If the price of JPN225 broke above that level, we could be in the process of lowerlows and lower highs in the Nikkei and higherhighs and higherlows in the JPY coming to an end. 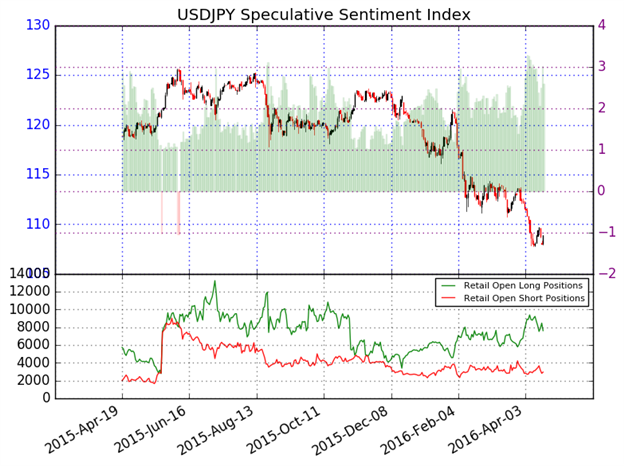 The ratio of long to short positions in the USDJPY stands at 2.63 as 72% of traders are long. Yesterday the ratio was 2.40; 71% of open positions were long. Long positions are 2.6% lower than yesterday and 15.3% below levels seen last week. We use our SSI as a contrarian indicator to price action, and the fact that the majority of traders are long givesa signal that the USDJPY may continue lower. However, it is wise to keep an eye for short-positions building up as that could be indicative of a sentiment and a signal flip is developing.