The Canadian Dollar has had a weak September, hitting its strongest point of the month on the first trading day of the month, and having already flirted with fresh monthly closing lows at the start of this week. The turning point for financial markets, in general and for the Canadian Dollar, may have occurred with the release of the August US nonfarm payrolls report at the start of September.

Pay Attention to US Jobs Data on Friday

Better than expected US jobs data as reflected by a steeper drop in the US unemployment rate (U3) provoked the Trump administration to pullback on its eagerness to agree to another fiscal stimulus plan with Congressional Democrats. The reduced expectation for more deficit spending in the near-term proved to bolster US real yields (vis-à-vis reduced inflation expectations), which have climbed higher through September, in turn lifting the US Dollar while sinking crude oil, gold, and stocks.

With the forex economic calendar rather barren for the Canadian Dollar over the coming week, attention once again turns to the US labor market, with the release of the September US nonfarm payrolls report on Friday (the September Canada jobs report will be released on October 9). Another strong US labor market report and expectations for near-term fiscal stimulus could drop further, providing a lift to US real yields and thus sending energy, precious metals, and equities lower in tandem – the Canadian Dollar included.

But a weaker US jobs report could stoke speculation that the Trump administration will cede to Congressional Democrats demands for a more robust fiscal spending package, including bolstered unemployment benefits or another one-time distribution to individuals, a potentially politically-appealing prospect for US President Trump ahead of the November elections.

Focusing back on the Canadian economy itself, the decline in oil prices has hurt the sector responsible for 11% of Canadian economic output. Couple that with the fact that the US economy may begin to slow once again amid another rise in cases – we’re three weeks after Labor Day, and in July, coronavirus cases peaked three weeks after July 4; the economy stalled in July – and there may be a near-term headwind for the Canadian economy, and thus, the Canadian Dollar. After all, 20% of Canadian GDP is tied to economic activities with the US. That said, it still holds that “the Bank of Canada still sees too much uncertainty to make any significant changes in the near-term.” 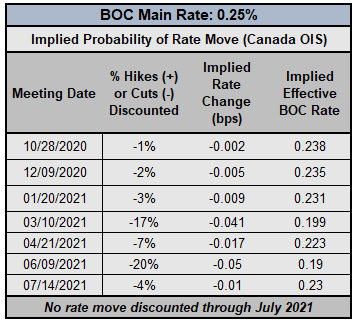 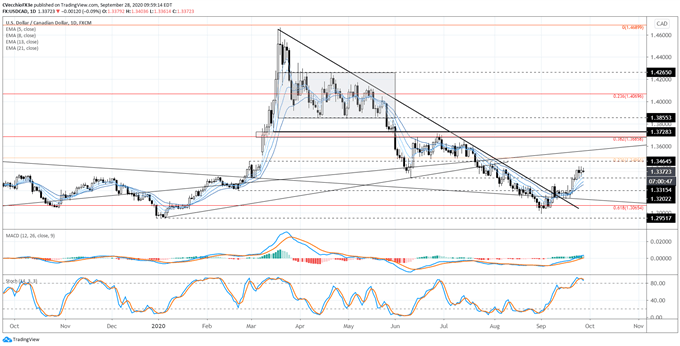 The downtrend from the March and May swing highs was broken in early-September, and the follow-through to the topside has been meaningful. Although USD/CAD rates’ rally is stalling ahead of the late-February swing high (which proved to break with a gap higher in mid-March), bullish momentum has indeed firmed up. Despite three inverted hammers, USD/CAD rates remain above their daily 5, 8-, 13-, and 21-EMA envelope, which is in bullish sequential order. Daily MACD is trending higher, now above its signal line, while Slow Stochastics are holding in overbought territory. 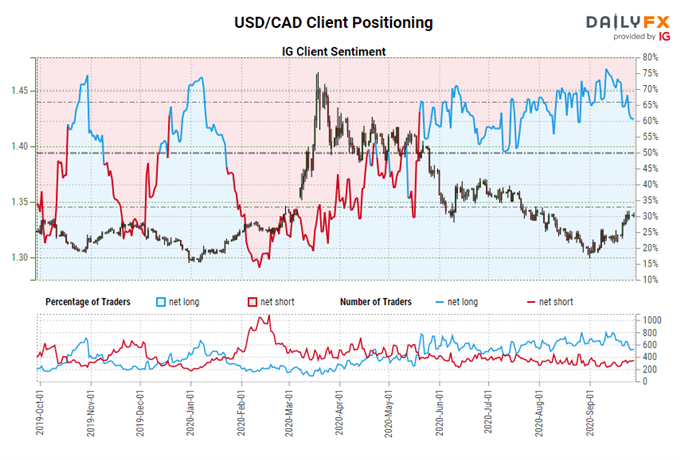 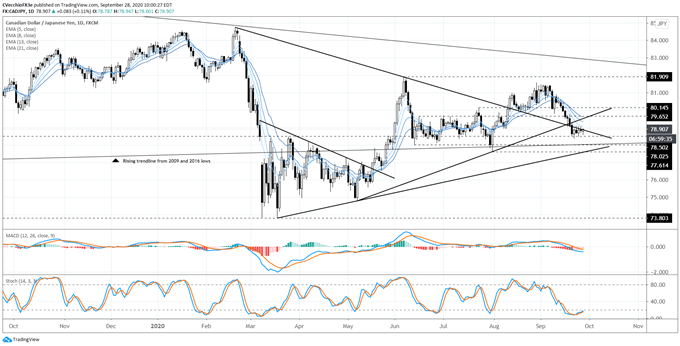 CAD/JPY rates have fallen below the rising trendline from the May and July swing lows, and are struggling with former triangle resistance from the February and June highs (now serving as support. CAD/JPY has seen bearish momentum accelerate, with CAD/JPY rates below their daily 5-, 8-, 13-, and 21-EMA envelope, which is in bearish sequential order. Daily MACD is trending below the signal line, while Slow Stochastics have fallen into oversold territory. Failure into the triangle would signal a false bullish breakout, suggesting an increased likelihood of more losses to come in October.