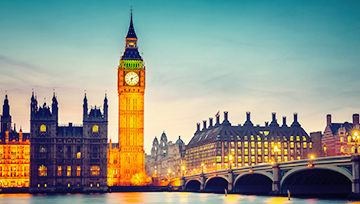 Find out what’s driving Sterling and the FTSE 100 in our market forecasts.

Last week, we were again discussing the importance of the top-side trend-line running over highs since January. Given the trend-line is running in the direction of the trend we initially viewed it last month as only minor in significance, however; it has been quite a struggle to overcome. It’s been upgraded from ‘minor’ to ‘major’. Twice last week the FTSE attempted to trade above but was swiftly rejected, putting in a pair of daily key reversal bars. The three rejections since the middle of last month, with the last two coming just a couple of days apart suggests we may soon see a move lower. On the weekly time-frame, a perfect ‘doji’ was formed with the open and close arriving at the exact same price – this confirms the bearish implications of the twin daily reversal bars.

The trend-line running up from the April low is keeping the footsie supported in the near-term. A drop below trend support will likely bolster downside momentum towards a major source of support at the 2013 top-side trend-line; a line which previously kept a lid on the market for several months until turning into support last month. It currently clocks in just above 7400. A drop and hold of the long-term line will be rather critical for keeping the market afloat given the potential for a bigger picture topping pattern if the market were to drop aggressively.

It’s too early to make this call, but should sellers show up in earnest and push the FTSE sharply lower towards 7100, a 'broadening top' pattern could come into play. A 'broadening top' is marked by higher highs with a flat bottom. Rallies of increasing size which fail repeatedly point to instability in the trend. It’s implications upon a confirmed break (below 7100) would be fairly ominous.

But before we get too far ahead of ourselves, though, focus is on the converging Jan/Mar top-side trend-line and rising trend support from April. A break below the April trend-line will put the short-term path of least resistance in favor of shorts. If the FTSE can hold and close above the top-side trend-line and negate last week’s pair of reversal bars, then we will shift our focus back towards seeing higher prices. One of these two scenarios look likely to play out very soon, with the first one viewed as the most probable.

Keep in mind: The UK General Election is on Thursday, and opinion polls will be released from now until then as well. Traders should be prepared for erratic price swings. 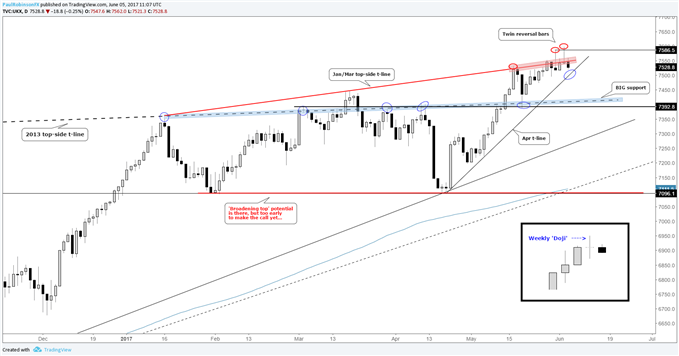