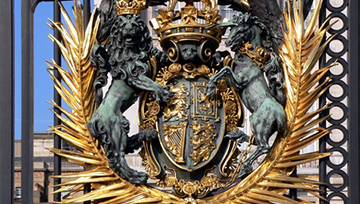 Find out what’s driving Sterling and the FTSE 100 in our market forecasts.

Monday’s update was titled, “Trading Between Key Lines of Influence”. With only a couple of trading sessions and price action having not moved much since, the FTSE is still on a mission of price discovery beyond noted lines of influence. Monday and Tuesday saw the market move up towards recent record highs and the top-side trend-line extending over peaks in January and March, but found a few sellers on approach.

If weakness sets in, the footsie won’t have far to drop before it should find sponsorship on the trend-line rising up from the April low; but even more important is the 2013 trend-line which was confirmed as support last week on the quick-hit in response to US politics souring. The long-term trend-line proved itself a problem from January through April before the FTSE finally broke on through. But it wasn’t just the breakthrough which captured our attention, it was the successful retest on a sharp drop which was also viewed as an important event. There was confluence with prior peaks as well, but all-in-all old resistance was proven to be a solid form of new support.

With that in mind, as long as the market can stay above this critical line of influence, then the market remains healthy from where we sit. Looking higher, the top-side trend-line (Jan/Mar) and record high at 7533 will be the hurdles to clear for higher prices to result.

Heads up: Later today the minutes from the earlier-month FOMC meeting will be released, and while it likely won’t cause any chaos, we can’t dismiss its potential impact on the market. Last month, the S&P 500 dove sharply and in response we saw Asia and Europe gap lower the day after. 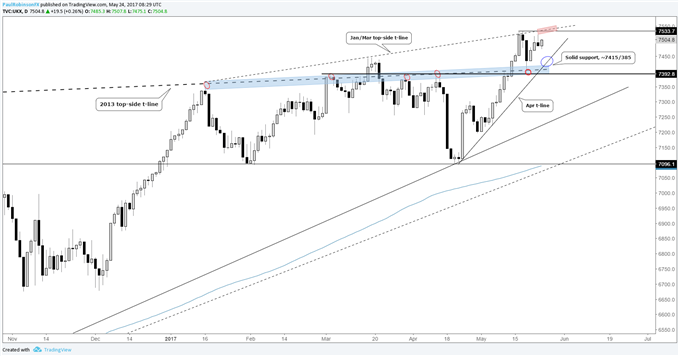