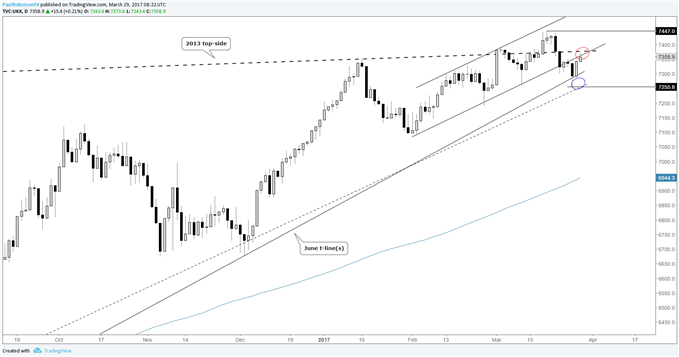 The title of Monday’s piece: “FTSE 100 Dropping into Trend Support, but Will It Hold?” The answer so far: Yes. The trend-lines running up from June/’Brexit’ held as support while other big markets in Europe – DAX & CAC 40 – are ripping to new major highs. There is certainly more excitement over those markets than in the UK. The U.S. is coming out of its recent slumber, led by the Nasdaq 100 as it doesn’t need far to go before notching a new record high. The recent mini ‘risk-off’ environment has turned to ‘risk-on’, but enthusiasm for the FTSE is lacking.

The bounce from trend-line support is pushing the footsie up against the underside of the channel it broke down from last week. It’s also trading in the vicinity of the ‘cross-through’ top-side trend-line extending higher from the 2013 high over the 2015 peak. It’s a rough line-in-the-sand given its duration, but noteworthy as the market has struggled around it since January.

Generally, the big-picture trend structure is not in question, but the short to intermediate-term is. If the FTSE can’t gain some momentum from here then it could be in for a lower high around some key lines of resistance. We won’t go into detail now because it’s not relevant at this moment, but a bearish price sequence could be developing (H&S top). In honoring the longer-term trend support (June trend-lines) we can’t be bearish; a breach of trend support would be needed for us to turn to that side of the ledger.

For now, enthusiasm is curbed for trades in either direction.