On Friday, we said the rising wedge the DAX (CAC, too) broke down from last Tuesday was at risk of failing to hold its often-times bearish outcome. But as we pointed out then, and again in the weekly forecast, there could be a ‘head-and-shoulders’ (H&S) pattern developing. Now that is at risk of not even coming to the point of triggering (decline below the neckline).

The market is chopping around, hasn’t held the same obvious directional bias (down) the U.S. markets have held recently. And looking more locally to the CAC, it is acting well given it broke down out of the same bearish pattern the DAX did, but from a long-term trend-line (2000-present), which seemed to set the French index up for a potentially harder break. But it didn’t. At least not yet.

Where do we go from here?

Given the DAX isn’t acting as expected since breaking the rising wedge (this pattern tends to lead to sharp moves), and the H&S formation is at risk of not providing an official trigger by breaking the neckline, the month of March to date could be a bullish consolidation period. Or choppy range activity eventually resulting in a break in either direction. More time is needed, but things are starting to look more bull than bear. For now, we'll take a wait-and-see approach with risk/reward unfavorable in either direction.

The CAC 40 acting well at the 16 ½ year trend-line is encouraging for the bullish case. As we said earlier, with bearish price action taking shape beneath the long-term barrier you would think it would have fallen out of bed by now. Perhaps given the length of time of the trend-line it will take some churning before it does so, but so far things are shaping up more bull than bear. A breakout above the trend-line, especially on a weekly closing basis, would be considered a pretty bullish event and one which could lead to much higher prices for stocks in France. 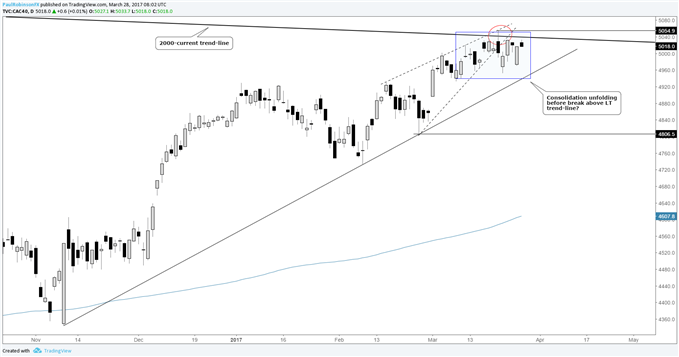