The New Zealand Dollar’s correction lower against the haven-associated Japanese Yen and US Dollar may be at an end, as the risk-sensitive currency remains constructively perched above key chart support.

However, NZD could continue to lose ground against the politically-sensitive British Pound, after carving out a Double Bottom reversal pattern just above a psychological inflection point.

In fact, the recent downside move appears to have validated the break above the 2014 downtrend and suggests a push back above the yearly open (0.6733) could be in the offing.

Moreover, with the RSI swerving back toward its neutral midpoint and the MACD histogram notably fading from its most extreme readings since March, the path of least resistance looks to be higher.

A daily close above the September 9 swing-high (0.6601) would probably signal the resumption of the primary uptrend and could see NZD/USD climb to fresh yearly highs, if buyers can overcome resistance at the July 2019 high (0.6791). 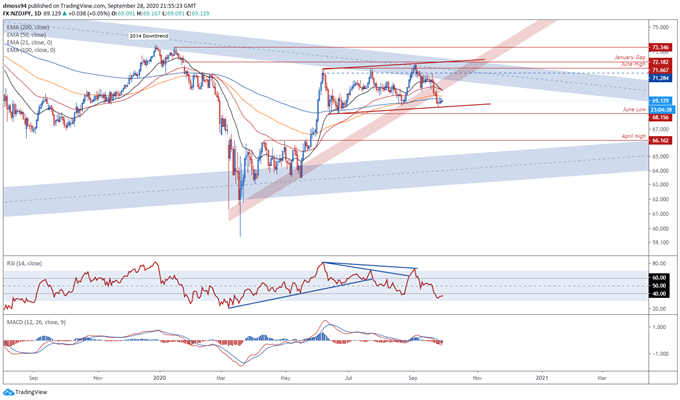 NZD/JPY’s break below the sentiment-defining 200-DMA (0.6929) and the uptrend extending from the March doldrums suggests that an extension of the 4.6% slide from the September high (71.96) could be on the cards.

However, with price continuing to track within the confines of an Ascending Channel and hidden bullish divergence seen on the RSI, a push back towards the August high (78.46) could be in the offing.

A daily close above mobile resistance at the 100-DMA (69.49) would likely invalidate the break below trend support earlier in the month and carve a path for price to retest the monthly high (71.98), if NZD/JPY can overcome the psychologically imposing 70.00 level.

Conversely, a daily close below the August low (68.76) would probably trigger a wave of further selling and could bring key support at the April high (66.16) into focus.

A surge to test confluent resistance at the September high (1.9929) and the downtrend extending from the highs of March looks likely in the coming days, if price can successfully close above the 61.8% Fibonacci (1.9608).

On the other hand, should psychological resistance at the 1.9600 mark continue to suppress buying pressure, a push back towards the monthly low (1.9055) could be on the table.