In last week’s DAX commentary, the focus was on big resistance around the neckline of the broad head-and-shoulders pattern, and how if that couldn’t be recaptured then the 2011 trend-line was likely to come back into play.

With global equity markets continuing to sag and the leading U.S. markets also failing to rebound, it looks likely the 2011 trend-line won’t hold much longer. It’s a very important line as it is effectively the last line of major support until lows seen in 2016 in the 9300/8700-area.

Trading down to those levels won’t happen in a straight line, though. On a break of trend-line support and last month’s low at 11050 there is good support down around 10800. The area surrounding this level, give or take 50 points, was created during a consolidation during 2016. It could be enough to put a bounce in, but not viewed as enough to cement a floor.

However, before becoming overly bearish it is important to wait on the 2011 trend-line to break as it is still support until it’s not. A bounce off the line back towards the neckline could develop, in which case traders may then be presented with another opportunity to sell the recently solidified neckline. 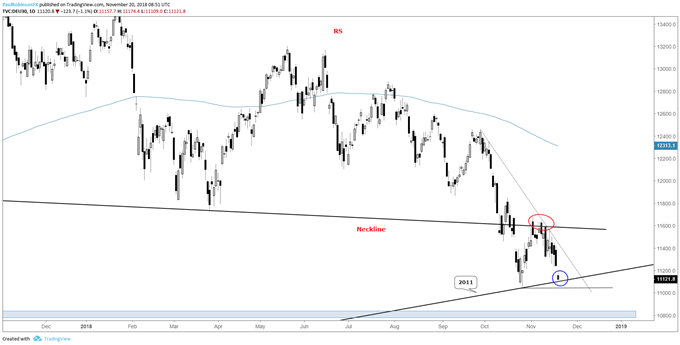