GBP/USD is once again in breakout territory trading above the 13500 level, a level that has been in play for over a decade with more recent impact since December 2019. And a lot of play around that level has been unfolding in the final weeks of this year as a Brexit deal looms.

Today, cable is once again pushing above the level for a third time this month, but will it hold? This could largely depend on whether a Brexit deal will be struck, which is the expectation as this point. Will it be a “buy the rumor, sell the news” type of deal, though?

Long GBP isn’t a particularly crowded traded as per the futures market, and in fact positioning in the market is effectively flat. So as far as a “buy the rumor, sell the news” scenario goes, has the market really bought into the rumor?

There are other driving forces at work here – the US dollar. It is has been declining in earnest versus currencies. Continued USD weakness could help propel GBP/USD higher as well once Brexit is out of the way. The timing of a potential breakout is interesting from a technical & fundamental standpoint.

A weekly, or monthly close for further confirmation, above 13500 is preferred given the long-term nature of the resistance level in question. Maybe we get that today, maybe not. But a closing weekly, then monthly breakout, could set GBP/USD up well as Q1 rolls around after the holidays.

A good whacking back below 13500, though, will at the least put bullish ambitions on hold. Perhaps another time we will see a resurgence, or maybe it ends up becoming too much to overcome as the market shifts its focus.

Should a breakout hold, the 14300s (2018 highs) appear to be a logical point on the charts to look for a rally to extend to, initially. From there we would reassess the situation based on price behavior. 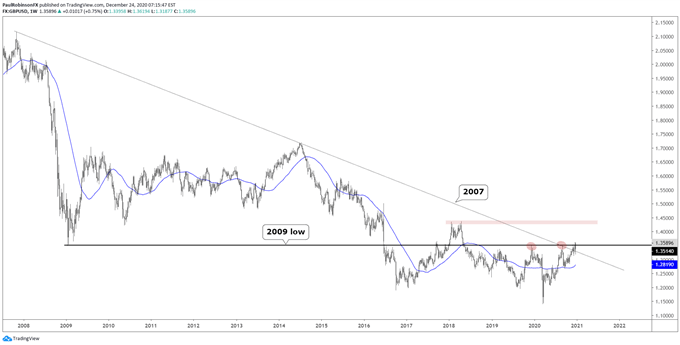 GBP/USD Daily Chart (can it sustain a breakout?)