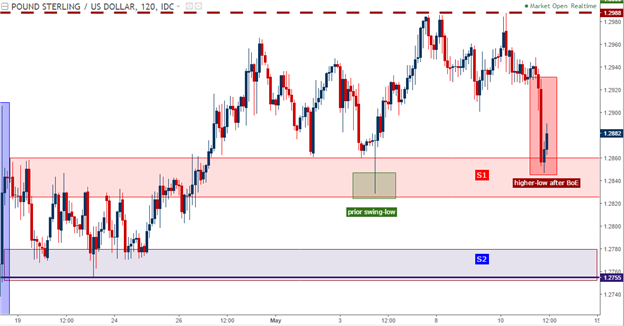 In our last article, we looked at the continued strength in GBP/USD after the top-side breakout from three weeks prior. That breakout, of course, was triggered when Prime Minister Theresa May announced early general elections in the U.K. But as we warned at the time, given the built-up short-side sentiment in the market, at least a portion of that move could be attributed to short cover as prices squeezed-higher. In the week after the breakout, price action built into a rather steady range, and this held until a quick top-side break was followed by a short-term bull flag formation.

Since that last article, GBP/USD has went on to set a fresh near-term high, falling just 12 pips short of the vaulted psychological level of 1.3000. And earlier this morning the Bank of England kicked off another Super Thursday in which the bank, yet again, took a rather dovish stance to markets. While raising inflation forecasts, the BoE also cut their estimates for GDP growth. Mark Carney continued with a dovish tone while also saying that real wages will fall this year as inflation continues to pick-up on the back of the depreciative effect of Brexit on the currency. Despite this, the Bank of England appears in no rush to be hiking rates; and Sterling fell as the BoE continued with their pattern of overt-dovishness in the wake of the Brexit referendum.

What is notable, however, is the fact that many GBP-pairs have merely put in ‘higher-lows’ as opposed to the out-sized sell-offs that have previously accompanied price action around such announcements. While bids were near non-existent after previous pledges from the Bank of England to remain accommodative, today’s announcement merely dented Cable by < 100 pips before buyers stepped-in above the prior swing-low.

This potential higher-low support check can open the door to bullish continuation strategies in Cable. Aggressive stances can look to place stops below the previous swing-low of 1.2829 with targets set towards the 1.3000-big figure. Those wanting to move forward a bit more conseravatively can look to place stops below the post-Breakout range low of 1.2755; and given the nearby psychological level of 1.2750, traders would likely want to set risk levels below that as well. 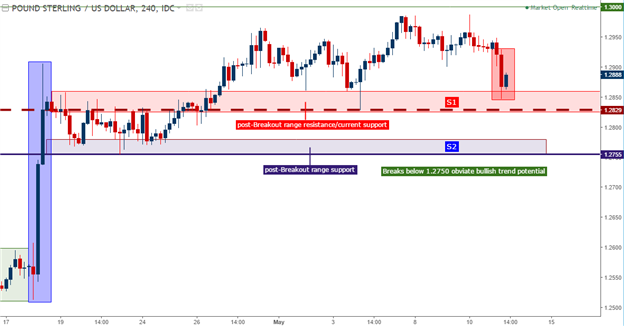