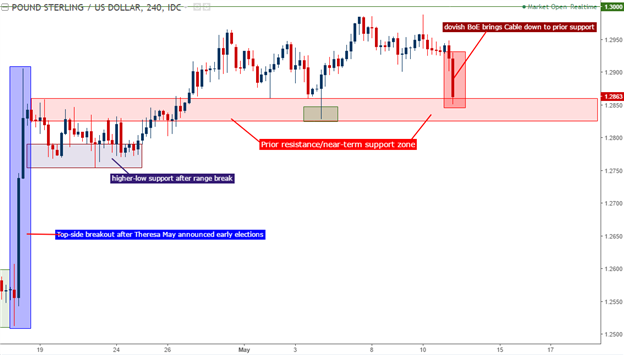 GBP Falls as BoE Stays Dovish: Reversal or Dip in the Bullish Trend?

- The British Pound has seen considerable strength over the past month after a top-side breakout fueled by Theresa May’s surprise announcement of early general elections continued to find higher-low support.

- The Bank of England took a rather dovish stance this morning while saying that inflation will likely continue to rise due to the depreciative effect of the British Pound post-Brexit.

This morning’s Bank of England ‘Super Thursday’ saw the BoE keep rates steady as the Monetary Policy Committee voted 7-1 to hold rates flat. The BoE also released GDP growth and inflation forecasts, and nudged GDP growth expectations lower while guiding inflation expectations slightly higher. The net impact thus far to the British Pound has been one of weakness as Sterling tilted-lower against most major currencies. Cable has moved down to a prior support zone that had previously furnished some element of resistance after the topside breakout three weeks ago.

Despite the seemingly dovish outlay from the Bank of England, which has become par-for-the-course for the bank since their concerted push ahead of and around the Brexit referendum, the pair remains bullish on longer-term charts as those areas of support have yet to yield. This can open the door for top-side continuation strategies provided that support does, in-fact, show up. Below, we look at the hourly chart to identify which areas to watch for such an occurrence. 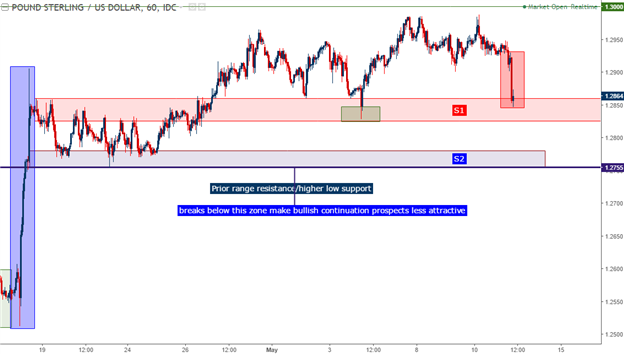 For bullish Sterling strategies, GBP/JPY may be more attractive

Also lower on the morning is GBP/JPY, which was in the midst of an out-sized bullish move ahead of this morning’s Bank of England announcements. After bottoming-out less than a month ago around the 135.50-level, GBP/JPY began a bullish run that saw the pair tack-on over 1,200 pips of gains. This brought price action very near the post-Brexit high at 148.46 before the BoE took the spotlight. And as this morning’s rate decision and press conference were filtering through markets, GBP/JPY finally caught a move-lower to show a retracement of the previous bullish move. Buyers have already begun to respond to those lower-prices in our ‘S1’ zone of support, but the bigger question is if the ‘dip’ is already over or whether the pair may have more room to run to the down-side.

Given the extremely early nature of this move relative to this morning’s Bank of England batch of announcements, traders would likely want to wait for a bit more confirmation. Should prices have another leg of run to the down-side, support at 145.67 could be very attractive, as this could open the door to bullish continuation strategies with stops lodged below the prior swing of 144.80; allowing risk levels to get on the other side of the 145 psychological level in the pair. 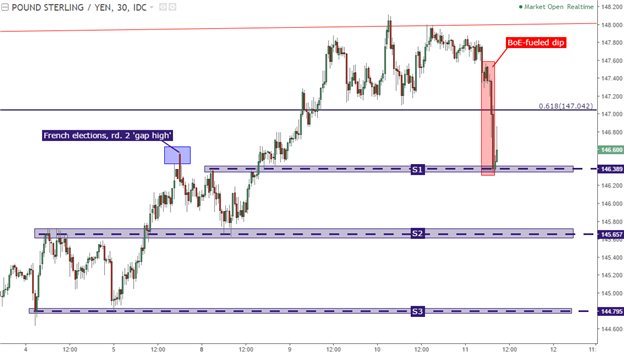