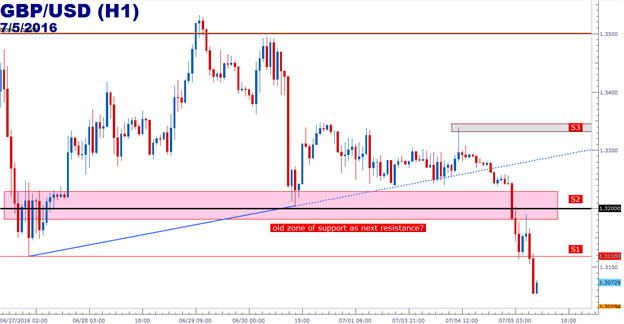 The British Pound put in a profound movement against the US Dollar on the heels of the Brexit referendum, setting a fresh +30-year low early last week at 1.3118. Tuesday and Wednesday saw a bit of a recovery as the pair rallied back to the 1.3500 level that was the low set in the Financial Collapse; but this rally seemingly came undone after Mr. Carney hosted an unplanned press conference in which he told markets that the Bank of England may be looking at a rate cut this summer to offset an expected decline in economic data that may come about from the decision of British voters to leave the European Union. This drove the British Pound down to the 1.3200 level against the US Dollar, and the early portion of this week saw that support level hold until Mr. Carney took the stage once again.

In this morning’s Financial Stability report, the head of the BOE warned that there is the threat of ‘material slowing’ in the British economy. In a preemptive response, the Bank of England is going to try to offset these risks just two weeks after the referendum by cutting capital requirements for banks; and may be looking at a rate cut at the next BOE rate decision on July 14th.

While actual impacts from Brexit may be too early to see in economic data just yet, and considering the fact that we likely won’t be seeing that next step in Brexit discussions until October after a new Prime Minsters is installed, the tone of the Central Bank is clear: The BOE is looking to take a dovish tone towards rate policy in the near-term, and that is bearish for the British Pound. The BOE is doing its best to telegraph extreme caution to markets, and the fact that we’ve already heard from Mr. Carney three times in the twelve days since the Brexit referendum highlights this fact.

So there isn’t much of a bullish case to be made on GBP/USD at the moment. The bigger question is how to position-in to shorts given that the pair is currently trading near fresh 30-year lows. And just underneath current price action is a major psychological level at 1.3000, which could complicate profit targets on short-side positions if this major level ends up coming into play for the first time in over 30 years.

Traders looking to get short in the Cable can look for resistance to form before triggering, and there are two nearby levels that could prove attractive. The prior ‘Brexit low’ was at a level of 1.3118, and earlier this morning just ahead of the release of that Financial Stability report, we saw that support level show again (indicated by the red horizontal line on the chart below). And a bit higher on the chart, and perhaps even more attractive for potential resistance is the zone in the 1.3200 range (highlighted by a red box). Resistance at this zone would enable traders to lodge a stop above the prior swing-high at 1.3340, with targets set towards that 1.3000 psychological level with a better than 1-to-1 risk-to-reward ratio.