GBP/JPY Technical Analysis: Bullish Harami into the Jaws of Support

In our last article, we looked at the 160-level as the ‘line-in-the-sand’ on GBP/JPY after two weeks of gains had lifted the pair by over 1,000 pips. But given that this rally was still well-below prior highs, we advised traders to be cautious towards chasing the move higher. The 162.50 psychological level that we pointed out ended up becoming resistance just ahead of last week’s BoJ meeting; and when the Bank of Japan failed to roll out any new policies, a surge in the Yen brought the pair right back down through previous support levels.

Nearly two weeks’ worth of gains were erased over the course of two trading days on Thursday and Friday of last week after this ‘no move’ from the BoJ.

At this point, price action is continuing to rest in a well-worn zone of prior support in the 154.70 area. The 27.2% Fibonacci extension of that move (the February high to the February low) produced the level that ended up becoming the absolute low in April at 151.61.

The obfuscation with looking at a short-side setup at the current juncture is the fact that the prior swing was all the way above 162.50 while a reasonable profit target down to 151.61 would offer a pittance of that risk amount in top-side potential. So the risk-reward on short-side continuation setups on the daily chart is, at this point, quite unattractive.

However, today’s daily candlestick setup has produced a bullish harami, which can often show up around swings or reversals. This isn’t a super-high-probability setup, so traders need to make sure risk management is worthy of taking the trade.

To trade the reversal, traders can look to place stops below this recent batch of support, with the low being 154.39, set earlier today. Traders can move that stop slightly below those lows at ~154.25 to take on approximately 80 pips of risk with current prices. Traders can then plot a scale-out approach in the effort of getting the average exit of the reversal a bit higher. The first level of interest for profit targets is at another well-tested Fibonacci level at 156.35. Should price action move up here, which would be slightly better than a 1-to1.5 risk-reward ratio, traders can begin to scale out of the lot, moving the stop to break-even on the remainder. After that, 157.21 becomes an interesting level for a secondary target, followed by 159.05 for a tertiary target. 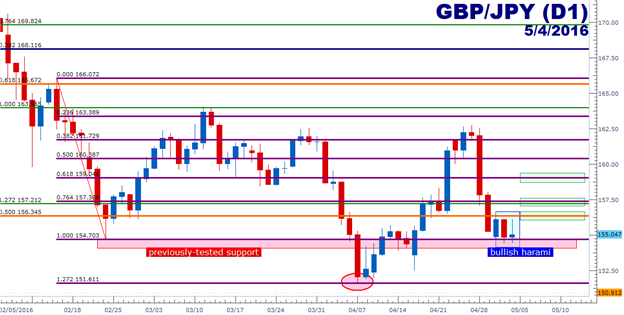