- The Bank of Japan held policy at last night’s rate decision, and this is a case of ‘no news’ becoming news in-and-of-itself.

- Signs of risk aversion have begun to show, but traders will likely want to approach such a situation with prudence. It's still far too early to prognosticate that January-like moves will continue after last night's 'hold' from the BoJ.

The big news over the past 24 hours hasn’t been the Fed’s hold at their April meeting; instead, it was another decision to hold policy by a different Central Bank on the other side of the world, and the result was markedly different.

While markets remained relatively quiet in the wake of the FOMC statement yesterday, the Bank of Japan rate decision overnight produced some outsized moves that may still be in the process of getting priced-in across markets. The Bank of Japan elected to make no changes to policy, and this is a situation where ‘no news’ is actually news, in and of itself. Many economists were expected some type of change out of the Bank of Japan, and after last week’s rumor that the bank may be investigating negative rate bank loans, in a similar vein as the ECB’s recently unveiled policy, many began to expect the bank to take further action. Further to that point , Yen strength had been a fairly pervasive theme and the move to negative rates in January did little to quell that.

However, for the Bank of Japan’s position of already lessened flexibility, it made sense to wait. The Bank made an aggressive move in January that didn’t work out too well; only increasing the threat of further risk aversion at the end of January. The prospect of negative rate bank loans is still very new and untested, and it’s far too early in the European program to be able to say definitively that this is a plan that will bear results.

The Bank of Japan likely isn’t done tweaking policy yet. The next BoJ rate decision is on June 15th and 16th (coincidentally, the next FOMC meeting is June 14th and 15th, so we will have another iteration of BoJ following FOMC within 24 hours), and this is likely where traders attention will begin to turn for that next move out of the Bank.

But don’t rule out the prospect of intervention in the spot market should Yen strength remain a persistent theme. Governor Kuroda has already said that the Bank of Japan is watching Yen spot prices; and this was widely inferred to mean that they would step in should matters of Yen strength begin to get out of hand. This means to be careful of getting too comfortable in long Yen positions, as further drops to fresh support levels could elicit reversals. In the past, whenever these accusations of BoJ intervention took place in the spot market, it would often be around psychological support and resistance levels; much like the 107.50 neighborhood that set the low earlier in April.

Moving forward, traders will likely want to pick their spots with re-entry in long Yen trends. The currency has put in a significant move so far after this announcement. The Nikkei, however, may be a little more constructive with near-term price action. We take a look at both below.

USD/JPY Near 18-Month Support, Be Careful of Getting Caught Selling at Support

The move in USD/JPY over the past 12 hours has been significant, with the pair running down to 18-month support just above the psychological level of 107.50. Traders would likely want to be cautious here as chasing the move lower could produce some adverse results. And perhaps more to the point, recent support and resistance structure may not be as usable given the fact that prices have moved down 350+ pips on the day. 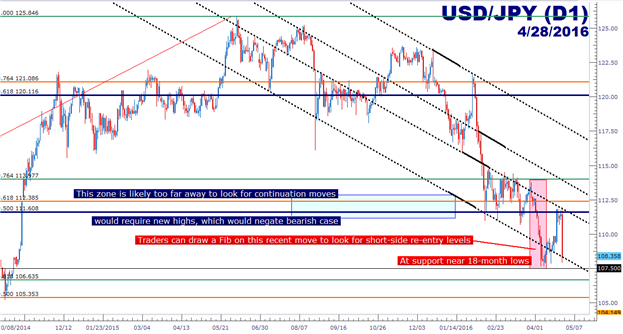 Traders can plot re-entry into USD/JPY by applying a Fibonacci retracement over the major move of the March 29th high to the April 11th low; and then looking for price action to resist at each of these intervals. The chart below has that Fib retracement applied based upon that most recent major move in the pair. 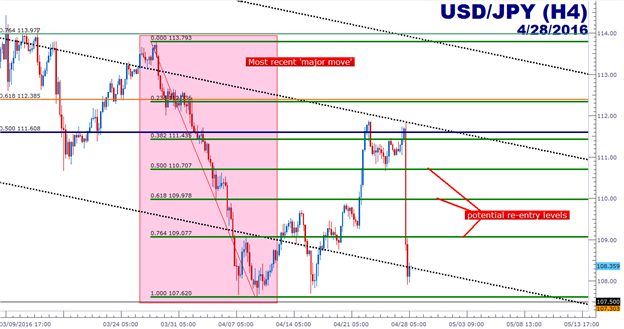 The Nikkei May Be Working on a Higher-Low, Let Price Break to Prove Continuation Potential

As mentioned earlier the Nikkei may have a more usable structure given current price action, and the reason for that is the fact that we’re not sitting at a near-term high or low. This means we can use recent price action to plot approaches, and the current batch of support after today’s move is a critical level for forward-planning.

Today’s low comes in right at the 38.2% Fibonacci retracement of the prior major move (February 2016 low to the March 2016 high). This level had also provided a strong bounce earlier in April, and current price action is testing this zone again. Of considerable note is the fact that this batch of support is above the prior point of support in the 15,368 region.

Traders can wait for a break of support on the Nikkei to prove that the short-side continuation theme may continue; and if this happens, traders can then look to sell resistance at or around prior points of support (such as the current zone in the 16,337 neighborhood. This is a price action tell as old support often becomes fresh resistance in a down-trending market. But if the break doesn’t take place, the trader stands aside. 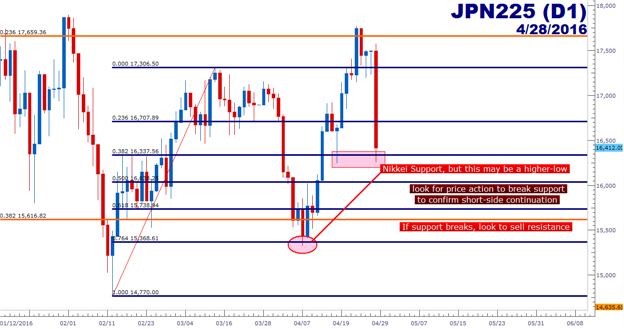