Just this week, the Italian government’s governing coalition appeared to teeter, with former Prime Minister Matteo Renzi pulling his party’s minister from current Prime Minister Giuseppe Conte’s administration. While it’s possible that a rearrangement of the cabinet prevents early elections, which would likely produce a dramatic turnover in government with the rise of Matteo Salvini. To close the week, Dutch Prime Minister Mark Rutte announced that he would dissolve the government two months prior to new elections following a child welfare scandal.

All of the sudden, the Euro, which was a high flyer coming into 2021, is now burdened by the albatross of political risk, even if markets’ collective attention still remains on the United States. 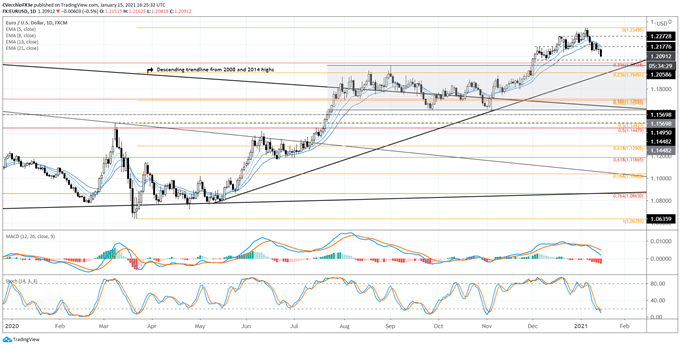 In the prior Euro forecast update on January 8, it was noted that “EUR/USD rates have crashed through multiple short-term technical support levels that suggest a near-term top may be coming into focus. Throughout November and December 2020, pullbacks never saw a break of the daily 21-EMA. But the pullback in the first week of 2021 now sees EUR/USD rates trading below the daily 21-EMA for the first time since November 23, a warning sign that bullish momentum has been exhausted.”

EUR/USD rates are dropping further below their daily 5-, 8-, 13-, and 21-EMA envelope, which is now in bearish sequential order. Daily MACD continues to decline while in bullish territory, while daily Slow Stochastics have fallen into oversold territory, a sign of strong bearish momentum. Losses may not extend that deep, however, if the longer-term bullish perspective (and DXY Index double top) remains valid. 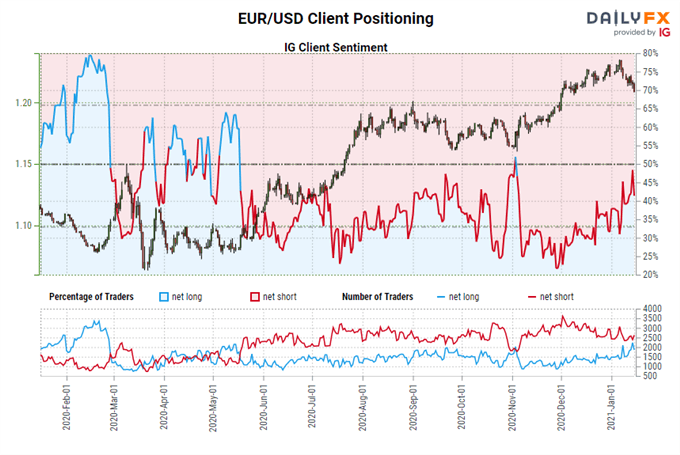 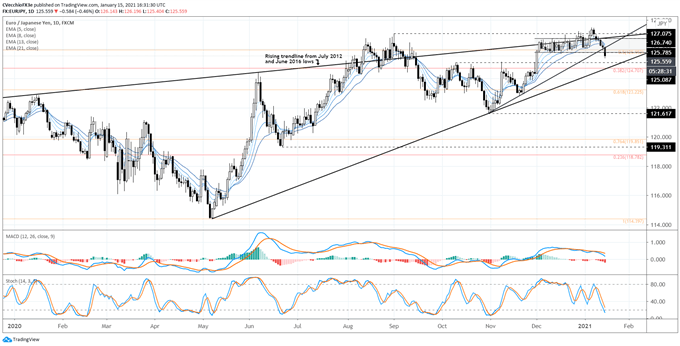 EUR/JPY rates have hit the skids in recent days, joining the slide in global equity markets (which EUR/JPY tends to track more closely than EUR/USD). EUR/JPY has dropped below the rising trendline from the October and November 2020 swing lows at the end of the week, and accelerating bearish momentum suggests that a deeper setback may still yet develop. The rising trendline from the May and November 2020 lows comes into focus near 124.70 next week, which overlaps with the 38.2% Fibonacci retracement of the 2014 high/2016 low range at 124.71. 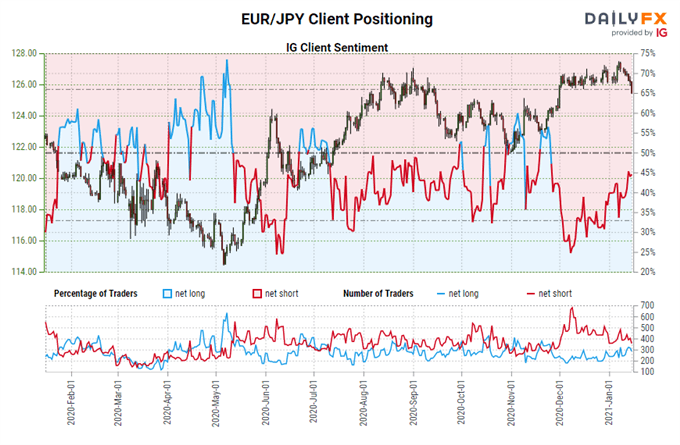 Positioning is more net-short than yesterday but less net-short from last week. The combination of current sentiment and recent changes gives us a further mixed EUR/JPY trading bias.