EUR/JPY: Bearish Break to Five-Month Lows as Tonality Has Changed

- EUR/JPY continues to exhibit bearish drive, producing another lower-high earlier in the week as near-term price action slaloms down to fresh five-month lows.

- There’s been a pronounced tonality change in the Japanese Yen during February, and this should not be ignored by Forex traders. The prior theme of Yen-weakness continues to face questions, and as Japanese inflation continues to rise, we may see a ‘Euro 2.0’ situation develop around Japan and the BoJ this year.

Last Friday, we looked at EUR/JPY trading down to fresh five month lows as bears started to get a bit more aggressive around a key area of longer-term support. That support had held since September of last year, and this even includes the October ECB rate decision when the bank extended stimulus into 2018. That stimulus extension disappointed many that were harboring hopes of a taper or some clarity around how the ECB may look to remove the ‘pedal-to-the-floor’ accommodation; but the fact that this did not produce lows in EUR/JPY added even more interest to the deductive read of longer-term strength in the pair.

That strength largely continued as we moved into this year. Prices in EUR/JPY surged up to a fresh two-year high as we came-into February; but that strength has quickly reversed and as we near the end of the month, the tonality in EUR/JPY is far different.

EUR/JPY Four-Hour Chart: A Brutal Change in Tonality in February At this stage, prices are making a quick run towards the 130.00 psychological level. Just underneath that, we have a Fibonacci level of interest at 129.66. This Fibonacci level is the 50% retracement of the 2014-2016 sell-off in the pair. The 61.8% retracement of that same move had previously helped to set resistance while EUR/JPY was ranging in Q4; and later became a quick area of support after the bullish breakout to start the year. This adds a level of validation to that Fibonacci retracement that could make this an interest area of support should it come into play in the coming days. 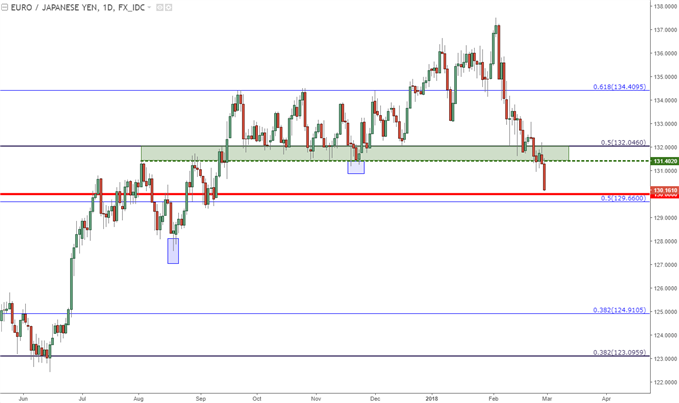 The big change of pace here is derived from the Japanese Yen. The prior theme of persistent Yen-weakness has come into question of late as inflation in Japan continues to rise. This has brought upon calls for the BoJ to look at their own stimulus exit or taper; very similar to what was seen in the Euro last year as strength in growth and inflation numbers led market participants to trying to get in-front of any potential tapering or exit from stimulus that might be on the horizon.

The ECB deferred throughout last year, even extending their program into 2018; but already in the New Year we’ve started to see the initial semblances of a shift, so it should come as no surprise to those that were watching the theme get priced-in last year before any such announcements were made.

Is the same scenario in the cards for the BoJ and the Japanese Yen? It’s still too early to tell; but with what we have given price action in Yen-pairs, it would appear that there is a growing probability of this theme getting even more interest behind it. As such, traders should approach areas of Yen-weakness with extreme caution.

We looked at short setups a couple of weeks ago in anticipation of support eventually giving way. But, with prices now at lows, quickly approaching the 130.00 level which also carries an area of support underneath at 129.66; traders should look to get on the short-side of the trend with extreme caution; at least for now.

The prior swing-high around 132.17 can be used for stop placement; meaning 200 pips of risk while prices are at five month lows is utterly unattractive. However, if we can see some form of short-term support develop here, bearish exposure could be established off of lower-high points of resistance. On the hourly chart below, we’re looking at a couple of areas of interest for such a scenario. 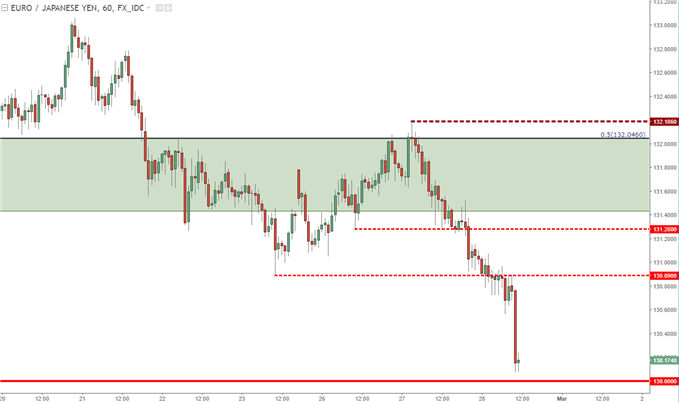