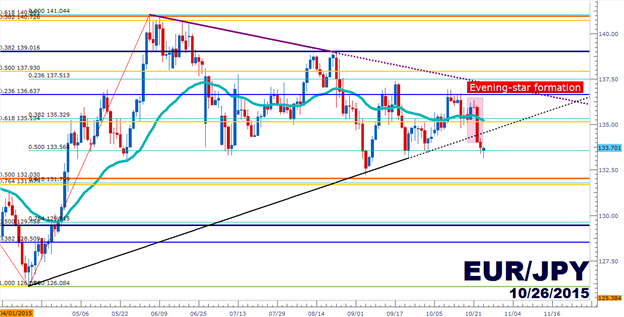 In our previous piece, we looked at a long setup in EUR/JPY after continued support in the 135-zone had provided a baseline for prices for three consecutive days. The initial target of 136 was hit within 24 hours of publishing that article; but a tombstone doji on the following day led to a huge candle-lower as the European Central Bank announced that they’d re-examine their QE-outlay at their December meeting. This led to an evening star formation (outlined in red on the below chart) that can often prelude continuation that sent prices down to the next near-term support zone at the 133.50 region, which is the 50% Fibonacci retracement of the most recent major move.

Near-term direction in EUR/JPY will likely be determined by the Bank of Japan. As data out of Japan has continued to disappoint, traders have been increasingly pricing-in an extension or increase to the Bank of Japan’s bond-buying program. Should the BOJ increase or extend their QE-outlay, then we’d have both economies represented in EUR/JPY actively diluting their currencies: This could make trading trends in the pair challenging, and the symmetrical wedge that had built up over the past six months is emblematic of that lack of direction.

But the recently-announced re-examination of ECB QE in December has provided enough motivation for the pair to break below the bottom-side of that symmetrical wedge, and should the Bank of Japan not take on the dovish-stance that many are expecting, the pair could see an elongated trend to the down-side as the Euro weakens ahead of this expected increase in European-QE.

The challenge for short positions right now is the current level of support that’s stymied the down-trend over the past two trading days. With BOJ on the docket for Friday (Thursday night in the Europe and the United States), traders may be best served by exercising caution. Resistance at the 134.50 area could be especially attractive for enacting sell positions, as this is the projected trend-line that had previously provided support in EUR/JPY. Should price reach this level over the next two days, traders could look at entering short with a stop above the 135-zone of resistance. Alternatively, should price action continue ahead of BOJ, traders could look for a break below 132 as a signal of the ‘bigger-picture’ trend coming back, and this could open the door for targets at 130, 129.61 (the 76.4% Fibonacci retracement of the most recent major move), 128.50 (38.2% of the ‘tertiary move’ in the pair, taking the 2012 low to the 2014 high), and then 126 (the 2015 low).

On the other hand, those looking to buy in EUR/JPY would essentially be trading on the prospect of the BOJ expanding their program later this week. This would be a reversal play that would likely want to lodge stops below 133 to get below the daily low (as well as below the 50% Fibonacci retracement mentioned earlier). This would open the door for targets at 134.50 (under-side of projected trend-line), 135 (major psychological level as well as a confluent zone of Fibonacci support/resistance), and then 136.63 (the 23.6% retracement of the ‘tertiary move’ mentioned above).