The British Pound is sitting near session highs across the majors as speculation arises that a Brexit deal may be getting close. As EU-UK trade negotiators continue to hammer out disagreements, the EU’s Chief Brexit negotiator, Michel Barnier, has said that “a deal can be reached,” while an unnamed Tory MP was being quoted across various news sources as to say that a no deal was “now less likely.” UK House of Commons leader Jacob Rees-Mogg was noted for commenting that UK parliament may have to vote in 2021 to “retrospectively” correct domestic laws to comply with an already-agreed upon Brexit deal.

The GBP-crosses are starting to gather pace around the news, as traders do their best to put together the puzzle pieces and see a picture of a ‘no deal, hard Brexit’ avoided. With risk appetite firming thanks to news across the pond that the US Congress is moving closer towards a fiscal stimulus deal, GBP-crosses have a chance to stretch their legs.

Our focus here, EUR/GBP rates, have reversed lower in the confines of their multi-month triangle and sideways consolidation. 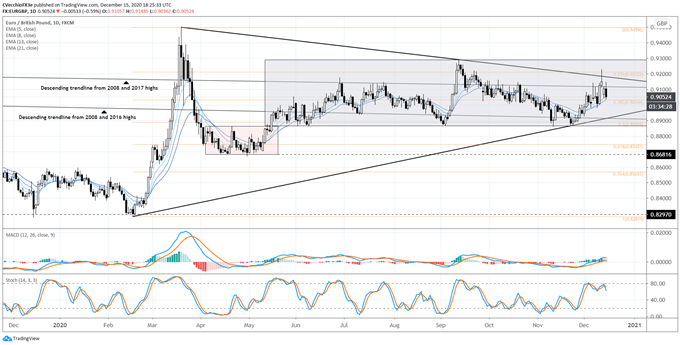 Insofar as EUR/GBP rates remain in their sideways consolidation since July, not much has changed from this strategist’s perspective since the last update on December 10. At that time it was noted that “a push higher from here into triangle resistance near 0.9180 is possible.” EUR/GBP rates pushed as high as 0.9230 before reversing, suggesting that symmetrical triangle resistance has indeed “exert[ed] its primacy.”

Still holding within the range, EUR/GBP finds itself below the descending trendline from the 2007 and 2016 highs. Bullish momentum is quickly fading, with EUR/GBP rates below the daily 5-, 8-, and 13-EMAs, even as the daily 5-, 8-, 13-, and 21-EMA envelope remains in bullish sequential order. Daily MACD is starting to compress while in bullish territory, while Slow Stochastics are trending lower after establishing a bearish divergence with price action (relative to the early-December high).

As momentum builds towards a Brexit deal – thereby avoiding a ‘no deal, hard Brexit’ outcome – traders should keep an eye for a return to the range lows near 0.8865. Breaking through this level would be an achievement two-fold, not only breaking the multi-month range support, but cutting through symmetrical triangle support off the February and November swing lows. With a deal in tow, a EUR/GBP rate selloff below 0.8865 would put the pair in bearish breakout territory. 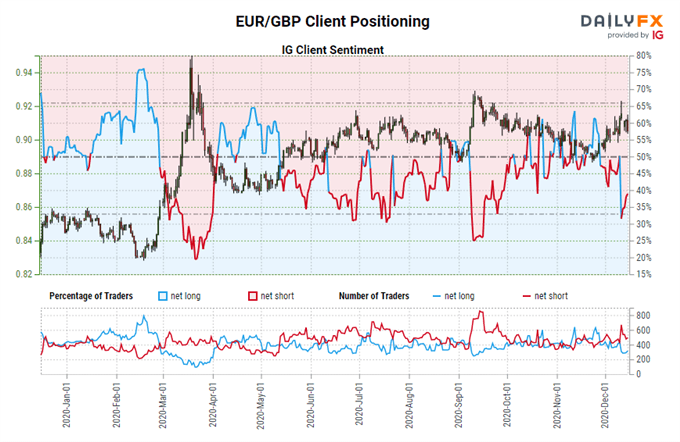 Yet traders are less net-short than yesterday and compared with last week. Recent changes in sentiment warn that the current EUR/GBP price trend may soon reverse lower despite the fact traders remain net-short.