Brexit Latest: Deal or No Deal? EUR/GBP Rates are Trapped in Range

Another Can-Kick Down the Road

The hyped dinner between UK Prime Minister Boris Johnson and European Commission President Ursula von der Leyen produced…well, another Brexit dinner this evening, Thursday, December 10, and a promise for both sides to keep talking until this Sunday, December 13.

Of course, given how many times that a deadline for a deal has come and gone, market participants are feeling a ‘boy-who-cried-wolf’-like fatigue from Brexit: no broken deadline has produced anything meaningfully of consequence for the UK economy, UK financial markets, or global financial markets. It’s difficult for traders to get too immersed in the narrative of a ‘no deal, hard Brexit,’ when somehow, someway a deal between EU and UK negotiators has emerged at one minute until midnight.

More Patience is Needed in EUR/GBP

The plodding pace of the Brexit talks has prevent any GBP-cross from gathering too much momentum, even in an environment defined by rising risk appetite and a weakening safe haven currency complex. And while in our prior update on EUR/GBP rates we declared that the pair was in “the midst of a bearish triangle breakout,” previous analyses focusing on a potential bearish range breakout proved early.

In light of the fact that EUR/GBP rates have been trading sideways for the better part of six months, without resolution to the Brexit saga, there’s little reason to think the range will break. 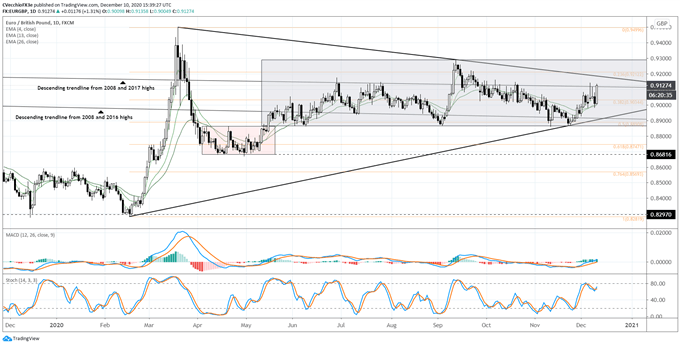 The earlier interpretation that“symmetrical triangle support from the February and September lows has broken (trading is a function of price and time, so a sideways move can force price outside of a consolidation, provided enough time has passed)” was wrong, even if the ultimate assessment – “more weakness towards the November low (0.8861) can’t be ruled out” – was right.

The rebound at the start of December occurred in tandem with EUR/GBP rates testing the descending trendline from the 2008 and 2016 highs. Now, the pair finds itself back at the descending trendline from the 2007 and 2016 highs. A push higher from here into triangle resistance near 0.9180 is possible; beyond there, the triangle may exert its primacy as the prevailing chart pattern and provoke a pullback in EUR/GBP rates.

Beyond 0.9180, it’s a short trip back to sideways range highs at 0.9292. But unless there’s a ‘no deal, hard Brexit,’ it seems unlikely that a rally into the range highs will yield a breakout. If EU-UK leaders decide to kick the can down the road again, the multi-month range trapping EUR/GBP rates will likely persist for the near-term. 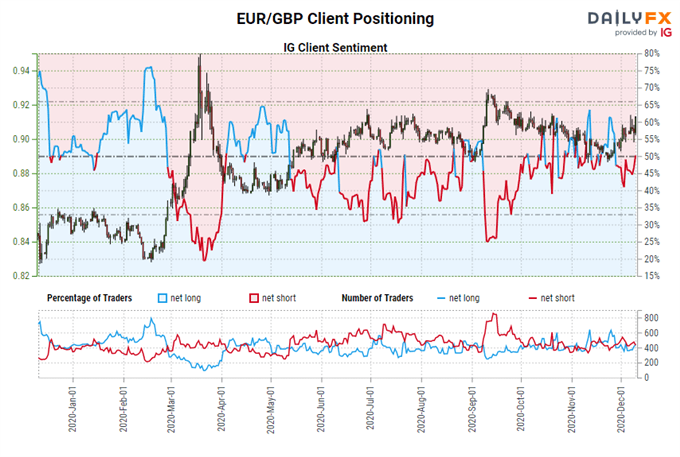 Positioning is more net-short than yesterday but less net-short from last week. The combination of current sentiment and recent changes gives us a further mixed EUR/GBP trading bias.