As forecasted, EURGBP pulled back after attempting to break past the seven-month resistance range between 0.9039-0.9060 (red dotted lines). The pair retreated to a familiar floor at 0.8952 (yellow dotted line), which in the past acted as resistance before becoming support. It appears the fickle price level is now reprising its role as the former although it is not entirely convincing it will be a formidable barrier to overcome.

EURGBP Shies Away From 7-Month High 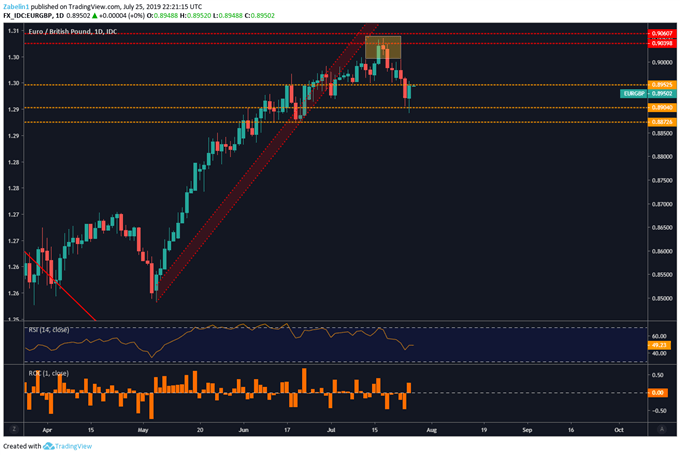 Recent Brexit developments may have been behind EURGBP’s decline. The appointment of Boris Johnson as Prime Minister removed the risk of uncertainty over who will take over from the beleaguered Theresa May. The Pound has been modestly stronger against most of its counterparts for the past few days. While normally, fundamentals would be kept out of a technical article, for GBP crosses this is difficult because:

“Performing technical analysis on a pair whose counter currency is linked to a fundamentally volatile environment makes it unusually difficult and unpredictable. There is no telling when a sudden political development will cross the headlines and what the respective magnitude of the price swing will be.”

The extent of EURGBP’s decline may be limited by the price parameters that have been in place since the 2016 referendum. Zooming out to a weekly chart shows the pair has been somewhat range-bound for a little over two years. EURGBP’s retreat may reflect markets’ hesitation to break one of these barriers, coupled with a slightly less uncertain fundamental backdrop. 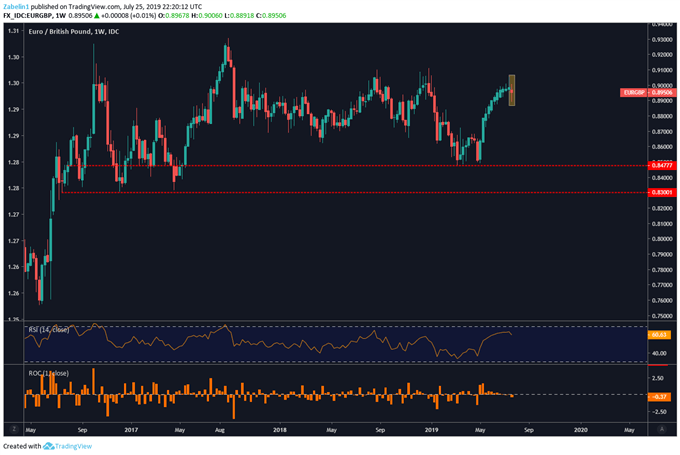 Looking ahead, the pair may hover between 0.8952 and 0.9060, barring any Brexit developments that offer traders the luxury of feeling a fleeting moment of hope over a resolution for the political entanglement. A break below support at 0.8874 could lead to a selloff, though Fibonacci retracement suggests the downward move may be limited with the pair hitting a possible floor at the 0.382 percent level.