Last week, EURGBP broke through a 2-month rising support channel, though this deviation from the steep uptrend did not discourage traders’ resolve. Despite slowing upside momentum as shown in negative RSI divergence, underlying bullish sentiment for the pair – arguably caused by eroding confidence in Sterling over Brexit – appears strong. 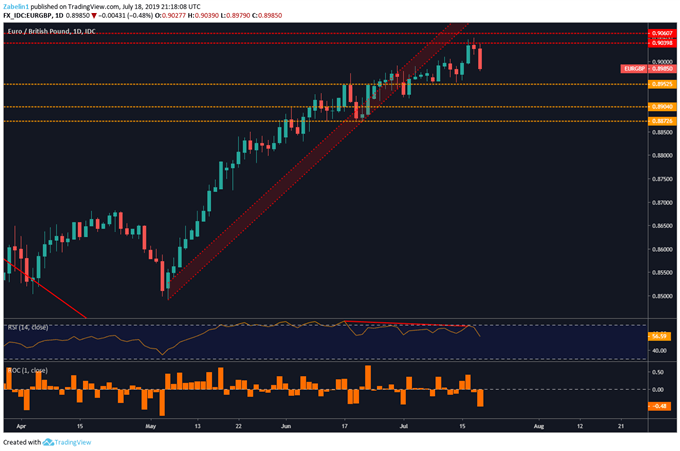 The pair is now aiming to breach the 0.9039/60 critical resistance range (red dotted lines). The last time EURGBP was trading within this zone was towards the latter half of 2018 and early breaths of 2019. In the coming week, the pair may shy away and trade between the lower bound and support at 0.8952 if traders do not yet feel confident enough to push through formidable resistance.

However, irregular price moves should be taken into consideration in light of the ongoing EU-UK divorce that has left both partners bitter and exhausted. EURGBP’s volatility is frequently reflected in political oscillations surrounding Brexit. The 0.42% jump on July 16 came the same day as a UK lawmaker said blocking a no-deal outcome may be more difficult than expected.

In this regard, performing technical analysis on a pair whose counter currency is linked to a fundamentally volatile environment makes it unusually difficult and unpredictable. There is no telling when a sudden political development will cross the headlines and what the respective magnitude of the price swing will be.

If you’re interested in learning how to analyze and trade around political risks, see my report here.

Zooming out, EURGBP has experienced a speculator bounce back after it touched the upper crust of the 2-year 0.8300-.8477 support channel (red dotted lines). Since early May, the pair has closed higher for eleven consecutive weeks, though the extending wicks and shrinking bodies of the most recent candles suggest the sugar rush may be wearing off. 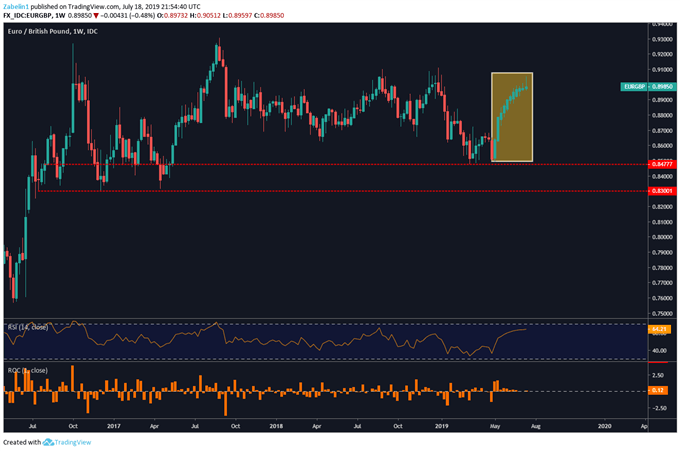