The current pricing model in GBP/USD suggests we are in a terminal and ending wave to the upside at multiple degrees of trend.

In June, we wrote:

“If the 1.3048 high breaks, then 1.3450 becomes the next significant level of resistance. Our model suggests 1.3450 may be strong enough to contain prices over the coming quarter.”

The updated Elliott Wave model we are following hints that prices may not make it up to 1.3450. 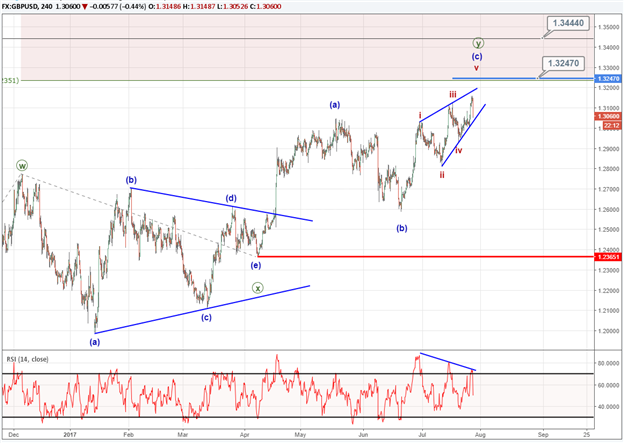 ‘Y’ waves of a complex correction are oftentimes an ending wave, though they do not have to be. However, in Cable’s W-X-Y combination of patterns, the ‘X’ wave is a triangle. We learned from our Elliott Wave Triangle webinar that triangles precede the last actionary wave of the sequence. What this means in simple terms is that the triangle is the second to last wave of the sequence. Therefore, we can imply the current move higher from April 7 is likely to be the final and terminal wave of the sequence.

(Learn more about Elliott Wave Triangles in this webinar recording.)

Within the ‘Y’ wave, it appears we are within the (c) wave that is another terminal and ending wave of the sequence. The ‘Y’ wave appears to be taking shape as a zigzag with the (c) wave ending diagonal. Ending diagonals are one of my favorite patterns because they can offer good risk to reward ratio trading opportunities. For this ending diagonal to be accurate under the rules of Elliott Wave Theory, GBP/USD would need to reverse lower below 1.3247. If the wave count as labeled above is correct, then this reversal may ultimately retest 1.19. As a result, bears may re-emerge soon in this market.

Bottom line, a break below 1.2978 does hint the top has been established so short traders can watch that level with interest. A break lower may begin a trend shift that retests 1.19. Prices would need to remain below 1.3247 for the ending diagonal pattern to remain in place. Above 1.3247, the longer term bearish view remains in place and we will watch how 1.3450 behaves (mentioned in the quarterly forecast).

Is the EUR/USD 30 month high a breakout or fake out?

Gold prices advance in the middle of a triangle pattern.