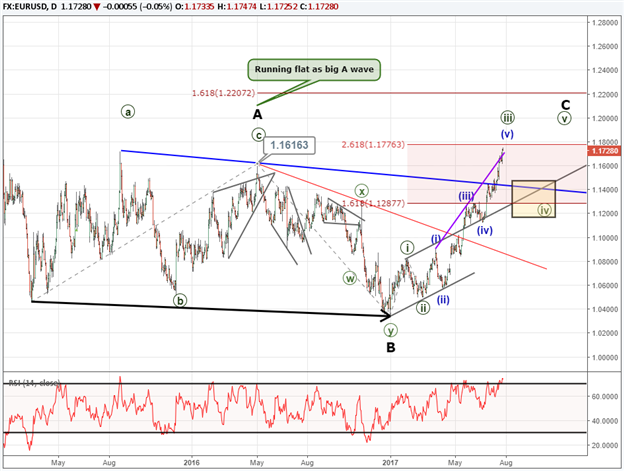 Is the EUR/USD 30 Month High a Breakout or Fake Out?

EUR/USD captured headlines today as it printed a fresh 2.5 year high on the heels of Yellen cautiously looking at inflation. We have been bullish EUR/USD since May 22 targeting a retest of the 1.16 highs. Now that we have arrived, what’s next? Is this new 30 month high a fresh breakout or a fake out to draw the bulls in?

The model we are following shows the shorter term trend may be nearing the end of this upward trend. Multiple models are pointing to a sell off towards 1.1250-1.1400. From there, the models begin to diverge.

From a bigger picture perspective, the Elliott Wave pattern appears to be a large expanded flat pattern that began March 2015. (For further study on flat patterns, watch this webinar recording on the various types of flats and how to trade them.)

We identified this flat as a potential pattern on the break above 1.10 back in May 2017. The wave relationships near Wednesday’s high of 1.1740 are quite interesting.

There are several methods to target the ‘C’ wave of an expanded flat pattern. One such method is taking the distance of the ‘B’ wave overshoot and adding it to the end of the ‘A’ wave.

We cannot say with certainty that the pattern since March 2015 is over, but we are getting close. You see, ‘C’ waves of flat patterns are motive waves so they subdivide in five waves. This current five wave move is shaping up like an impulse. (For further study on impulse patterns, watch this webinar recording on how to identify and trade them.)

I can count five waves complete, but it has a shape that makes it look like an extended third wave implying a fourth wave dip prior to a fifth wave higher and retest of 1.17. Third waves tend to have Fibonacci relationships with wave 1 and a 2.618 extension enters the picture near 1.1776.

Sentiment is still heavy towards the bears that also implies this uptrend may not be completely exhausted. IG Client Sentiment currently sits at -3.50. Check out the live trader sentiment reading and learn how to trade with sentiment with our IG client sentiment guide.

Bottom line, we have multiple wave relationships showing up in 1.1738 to 1.1776 pointing to a correction back towards 1.1250-1.1400. For the time being, this breakout could be a fake out. This is not a top I am comfortable shorting as the trend is still up. However, for those who have been long, you may want to manage risk accordingly.

Unsure of the longer term direction of EUR and USD? Grab these quarterly forecasts.

Gold Prices Advance in the Middle of Triangle Pattern