The safe-haven Swiss Franc has traded to the detriment of a market that has become less averse to risk as global vaccine rollouts continue amid massive government stimulus. That said, the fundamental outlook for the Franc is a bearish one. However, against the Japanese Yen—another safe-haven currency—the Franc may have a fighting chance to drift higher.

Currently, CHF/JPY is trading above its major Simple Moving Averages (50,100 and 200-day SMAs) and is drifting slightly lower after the upper-bound of a Descending Triangle pattern rejected a move higher. The 50-day SMA, which provided a level of support over the past week, may underpin prices and send the cross back towards triangle resistance.

A break lower would see the 100-day SMA shift into focus, with triangle support below that. The Descending Triangle is normally seen as a bearish pattern, and in this case, could bring the end of its broader trend higher if support gives way. However, if prices manage to maintain the current posture above the 50-day SMA, a break above triangle resistance would likely see a resumption of its prior trend. 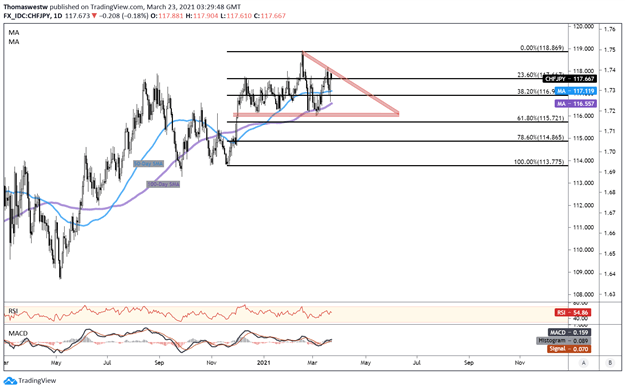 The Franc saw a rapid depreciation against the Euro in late February after the cross broke out from an Ascending Triangle pattern. EUR/CHF put in a multi-year high on the backend of that breakout, but prices stalled near the 1.1150 level before dropping just above the psychologically imposing 1.10 handle. The cross may push into a range of consolidation here.

On the other hand, EUR/CHF’s Relative Strength Index (RSI) and the Moving Average Convergence Divergence (MACD) are both oriented lower, putting a bearish tone in the air. Overall, however, the current level appears sufficiently supported to weather further pressure, with the 23.6% Fibonacci retracement level offering a level of confluent support just below the 1.10 handle. 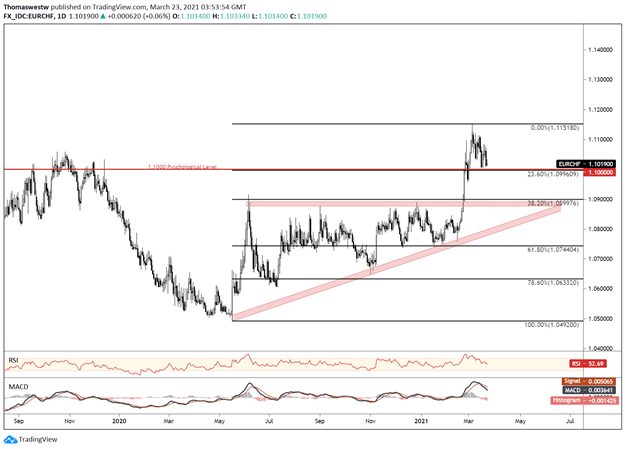