The Malaysian Ringgit has weakened to its lowest point against the US Dollar since January, with USD/MYR having recently experienced its largest gain in a single day (+0.55%) since November 2016. The pair has not only cleared a bullish reversal pattern, but it is now above the falling resistance line from November. The next phase in resuming the dominant uptrend involves taking out the psychological barrier at 4.1448 which if cleared, opens the door to December highs. Near-term support is at 4.13. Feel free to follow me on Twitter here @ddubrovskyFX for more timely updates on ASEAN currencies. 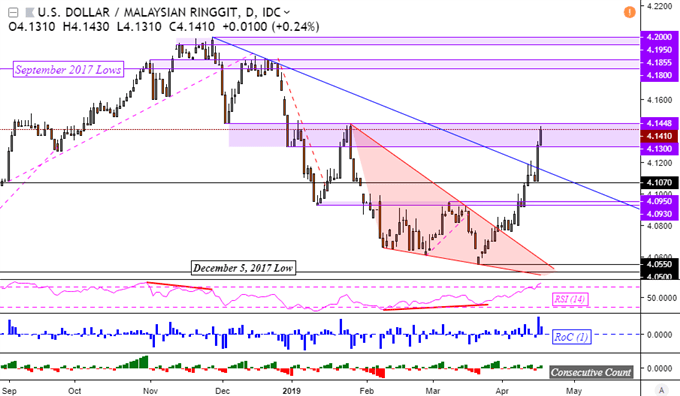 Meanwhile, USD/PHP came close to resuming the dominant downtrend from its top in October after support held above 51.59. The pair has since bounced back to a trend line from late January that has at this point acted both as resistance and support. Should the Philippine Peso weaken against the US Dollar, near-term resistance seems to be at 52.12. If USD/PHP on the other hand manages to turn lower and clear the psychological barrier, there may be few roadblocks to stop it from touching 51.16 (late January 2018 highs/February 2018 lows). 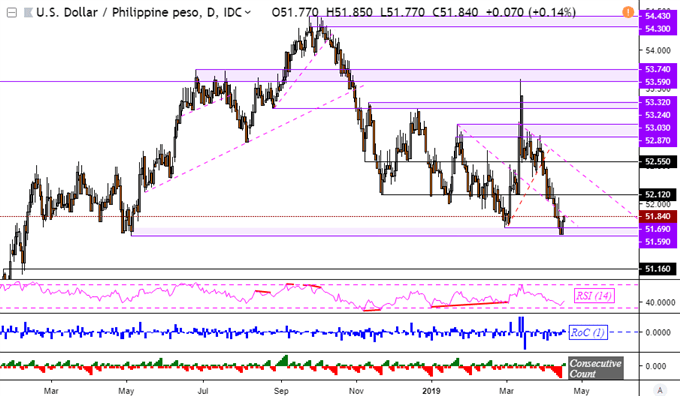 As USD/IDR is eyeing the Indonesian General Election, the falling resistance line from December (pink line on the chart below) seems to be keeping the dominant downtrend intact. After the Indonesian Rupiah gained against the US Dollar, the pair broke under a rising support line from February. This has opened the door to extending declines with the next psychological barrier eyed at 14010. Should USD/IDR fall through it, it will then be eyeing a range of support between 1348 and 13923. 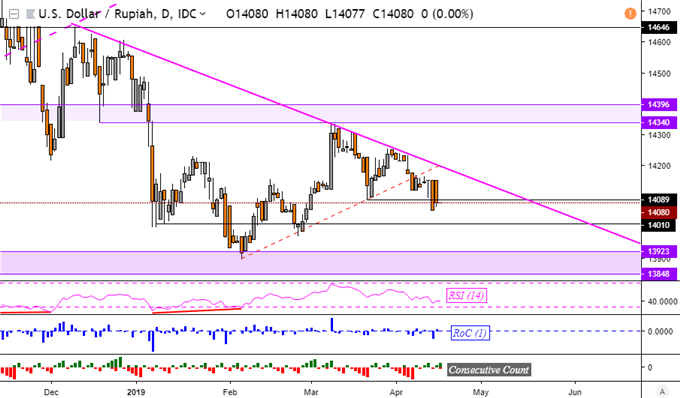 The Singapore Dollar still finds itself in a familiar range-bound trade against the US Dollar, even despite a relatively cautious MAS monetary policy announcement. In fact, USD/SGD oscillation seems to have narrowed to a boundary between support at 1.3516 and resistance at 1.3575. This is while at the same time, getting stuck on the falling trend line from October 2018 (red line on the chart below). A descent opens the door to testing 1.3472 while rising exposes 1.3608. 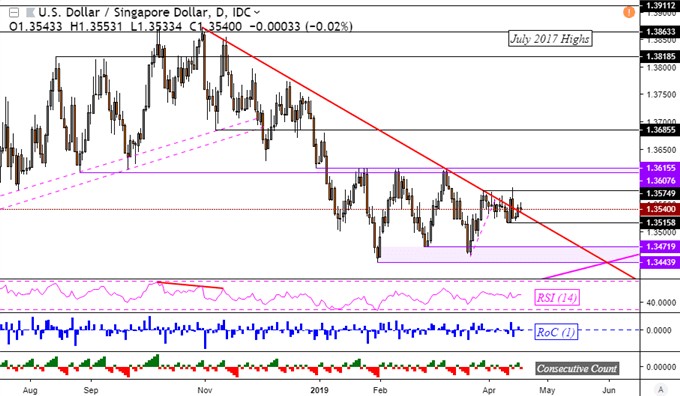