The US Dollar underperformed last week, aiming narrowly lower in rather choppy trade. A lot of the losses occurred during the first few days in the aftermath of a lackluster jobs report for the period of March. This resulted in overall mixed performance from some of its ASEAN currency counterparts. On Friday, the Singapore Dollar weakened following the MAS lowering growth and inflation forecasts.

While USD/SGD was more-or-less little changed by week-end, the Malaysian Ringgit largely underperformed. USD/MYR inversely tracked a decline in palm oil futures, Malaysia is the world’s second largest producer of the commodity. Meanwhile, USD/PHP fell, brushing aside increasingly dovish commentary from the Governor of the Philippine Central Bank on Friday as the Greenback weakened. 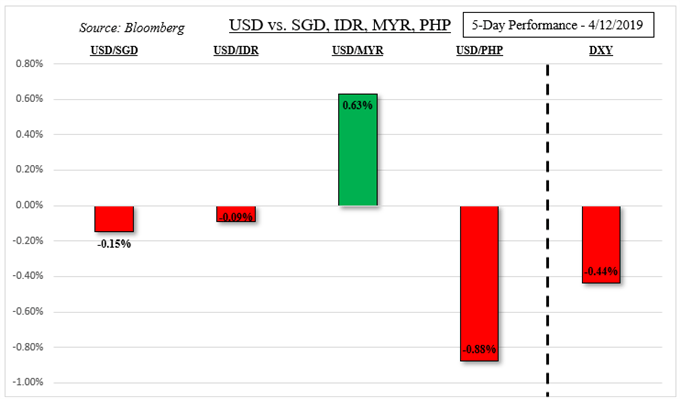 USD/IDR is eyeing the upcoming Indonesia general election on April 17th. Incumbent President Joko Widodo, of the PDI-P party, has been leading in the polls against challenger Prabowo Subianto, of the Gerindra party. Albeit, recent surveys have been showing that the president’s lead has been somewhat narrowing. A status quo outcome may keep Rupiah volatility relatively stable.

On the flip side, a victory for Prabowo Subianto, based on opinion polls, may temporarily weigh against IDR as investors reassess their positioning. Mr Prabowo has promised tax cuts and if he wins, that may bolster the Rupiah down the road as it may lessen the urge for the Bank of Indonesia to cut rates. Regardless of the outcome, it still remains committed to upholding the value of IDR in close intervention.

Meanwhile, on the same day eyes will be on Chinese first quarter GDP data. According to the Citi Surprise Index, Chinese economic news flow has been tending to outperform relative to economists’ expectations. This suggests that perhaps models are being too pessimistic and an upside surprise may reduce global growth slowdown fears. That may boost equities and sentiment-linked ASEAN currencies.

US Earnings Season and Data

With concerns being raised by major central banks about the global growth environment, risk trends will be keeping a close eye on the US first quarter earnings seasons. So far, it has been a less-than-optimal start as Wall Street traded sideways. Signs of trouble ahead in the world’s largest economy could easily spark adverse knock-on effects that may spill into Asia Pacific equities.

In addition, keep an eye on US retail sales and PMI data which is another element in this equation. In stark contrast to China, data in the world’s largest economy has been tending to disappoint. The balance here will be how the US Dollar behaves as a liquid haven. You may follow me on twitter here @ddubrovskyFX for timely updates on how these impact financial markets and ASEAN FX.