Crypto-mania appears set to unwind once again. The other day we were noting that if Ethereum soon turns swiftly lower it could mark the 3rd peak of a topping pattern with potential of more than halving its price. While the price sequence isn’t as decisive for Bitcoin, sellers were found in an area we were looking to as a potentially big turning point.

The other day when we were last discussing Ethereum it was pushing towards a trend-line we had penciled in as resistance. It didn’t quite make it that line, instead stalling from around lows created a month-ago. In any event, the turn lower was swift and may have cemented a top.

The price sequence of two lower-highs (3 peaks) and a lower-low is a sign of a market growing increasingly tired. With sellers now showing up in earnest, as long as ETH/USD doesn’t trade back above 974 the best days may be behind it.

Looking lower, the first line of support comes in by way of a trend-line extending higher from November, residing in the 600s. Below there, the monthly low at 565 is the next targeted level of support. The eventual target still remains a full reversal of the rally out of the 2nd half 2017 wedge (targeting ~400). 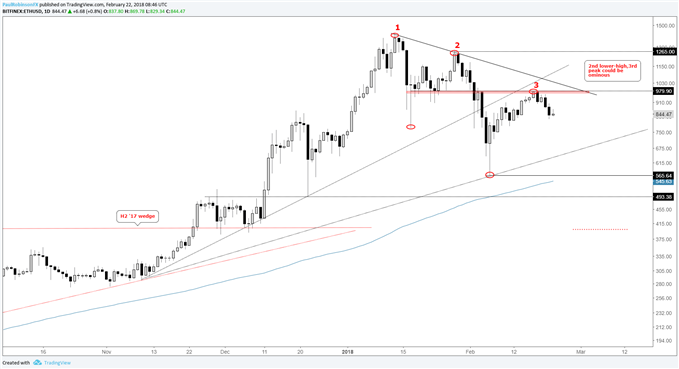 The 3 peaks at subsequently lower prices points to a major top. It’s an unusually volatile pattern given the instrument, but nevertheless points to even more damage than we’ve already seen.

Bitcoin turns down from around apex of triangle, another lower-high may be set

On Tuesday, Bitcoin posted a small bearish candle around the apex of the triangle which led to the last swoon. The turn lower so far hasn’t been as aggressive as what we are seeing in Ethereum, but Bitcoin’s fate is likely to be the same – significantly lower prices.

It could still make one more push higher towards 13k and hold the same bearish outcome, but for now we’ll work with the Tuesday high at 11780 as the top-side threshold to watch. Looking lower, the 200-day MA is rising up through the mid-8400s. Beneath there, is a trend-line running higher from March of last year to keep an eye on.

The big lower-low doesn’t arrive until all the way down at 5920, but if the mania is moving in reverse – which is believed to be the case – then it should just be a function of time before Bitcoin goes well below this month’s lows. 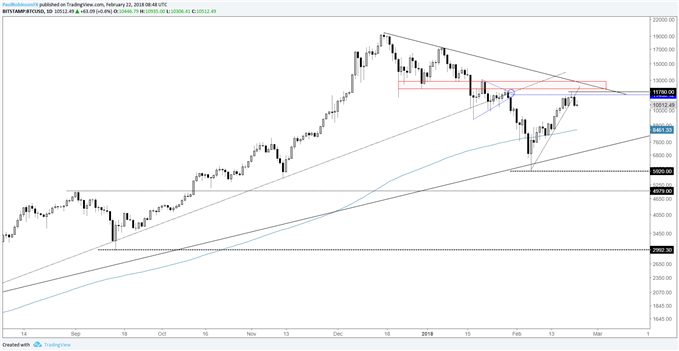 In blue, is the triangle and ‘apex resistance’, from which Bitcoin turned lower yesterday. It could trade up into the red-zone/trend-line and still maintain a broadly bearish outlook.