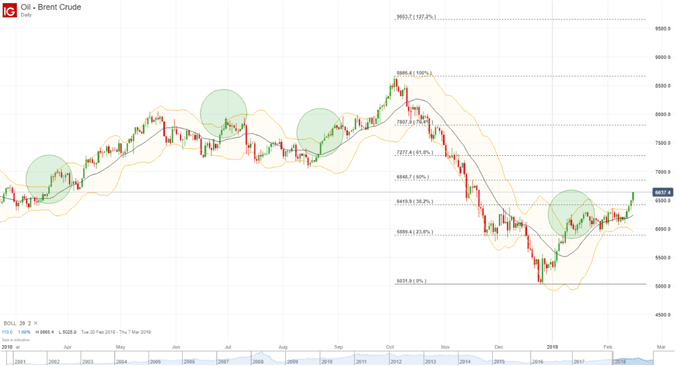 History does not repeat, but it sure does rhyme, and that should be music the crude oil bull’s ears. Crude’s bounce has been aggressive, and one of the more exciting and quick retracements that crude oil traders have seen in a while.

Crude topped in June 2014 and would not find a bottom until January 2016 after falling 77%, and it would take a little more than 22 months before it would jump above the 38.2% retracement. Afterwards crude would go on to rally another 43% or $21/bbl before hitting the October 2018 high.

The concern for the current rally is that stockpiles were seen rising in the US per the EIA Crude Oil Inventory Report on February 12 while much of the bullish move is being driven by production cuts and geopolitical tensions. The supply cuts are coming from OPEC and their allies while the geopolitical concerns are from the depleted stockpiles of Venezuela’s PDVSA.

A Look at The Price & Bollinger Band Relationship

Crude oil traders are likely placing themselves in a buy or ‘wait to sell’ modality. That is the beauty of technical analysis, especially in commodity markets. When markets are trending higher, as they currently are, bears don’t have to fight the flow of fundamental crosswinds like sanctions and production cuts; they can wait (patiently) for a break of key support as opposed to fighting the trend.

A key technical indicator you can look to for this aspect is the Bollinger Band with 2 std. deviations and a 20-period moving average. Since early 2018, the upper band has been touched three times (not including the current touch on Brent), and twice in August & March, the price has walked up the upper Bollinger band for multiple weeks in a melt-up before breaking down.

In other words, with this recent move higher with fundamental support, bears should tread carefully or hibernate till support breaks.