Japanese Yen Weekly Technical Forecast: The Good, the Bad, and the Brexit

- The Japanese Yen has been underperforming versus the US Dollar despite dropping sovereign bond yields and weak equity markets.

- Building concerns in Europe – from Brexit for GBP/JPY to Italy and France for EUR/JPY – have created grounds on which the Yen may able to rally.

In what is proving to be a more consistently difficult environment for risk appetite, the Japanese Yen has found its services in surprisingly low demand. Typically, when traders become more risk averse, the low yielding Yen rises to the occasion as a safe haven. Such is not the case at present time. Regardless of movement across asset classes, the Yen appears to be trading on a case-by-case basis. Among the three most liquid JPY-crosses, there’s one setup that may be good for the Yen, one that may be bad for the Yen, and one that’s plain ugly – and that’s because it’s Brexit-related. 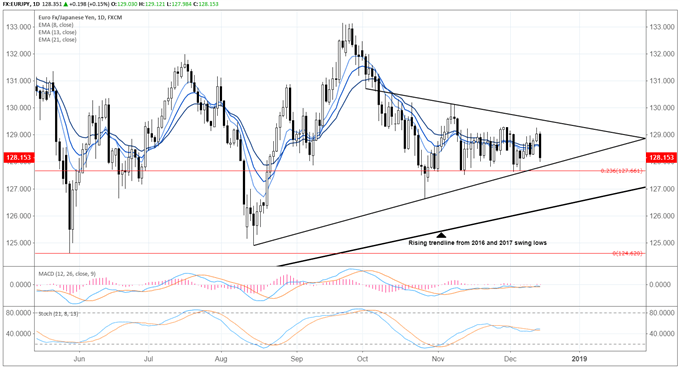 Exposure to the Japanese Yen must be selective, and EUR/JPY narrowly fits the qualification of a pair that traders should have on their radar this week. A tightening price range in recent weeks has produced a symmetrical triangle in EUR/JPY, with the bulk of the consolidation coming since the start of October. But now that risk aversion is spreading globally, and Europe is seeing its own problems swell, EUR/JPY may start to come into focus as a pair set for more volatility moving forward.

At present time, there’s not much to like on either side of a trade, technically speaking. A clear lack of momentum – as noted by flat Slow Stochastics and daily MACD around their respective median or signal lines – limits appeal for bulls or bears, and price’s lack of proximity to either the monthly high or low means that range traders are sidelined as well. For now, the key level for bears is the 23.6% Fibonacci retracement of the yearly high to low range at 127.66; a break below here would suggest the bears have the breakout decision went to the bears. Otherwise, bulls will want to see the late-November swing high at 129.29 broken before a topside attempt is confirmed. 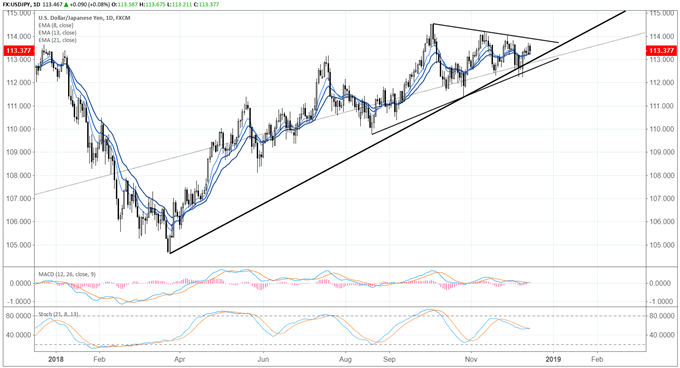 To say that USD/JPY has been resilient in recent weeks would be an understatement. Continuing to hold the rising trendline from the 2012 and 2016 swing lows (dotted line cutting across chart), a symmetrical triangle with a clear upside bias has formed since, arguably, August. With the uptrend from the late-March, October, and early-December swing lows maintained, there is plenty of trend support keep price biased to the topside.

Even though there is not much separation between price and the daily 8-, 13-, and 21-EMA envelope at present time, from the Japanese Yen’s perspective, one can’t be discouraged by the lack of reversal in USD/JPY amid the pullback in indicators. Both daily MACD and Slow Stochastics have reverted from their more extreme readings in recent weeks, but USD/JPY has barely pulled back in price. Whenever momentum indicators regress but price does not, this is a signal of a well-supported market; that’s what makes this the “bad” chart for the Japanese Yen. Only below 112.23 would the budding bullish USD/JPY bias be invalidated; but below there, the conditions for a top would be in play, and the bias would turn aggresively bearish. 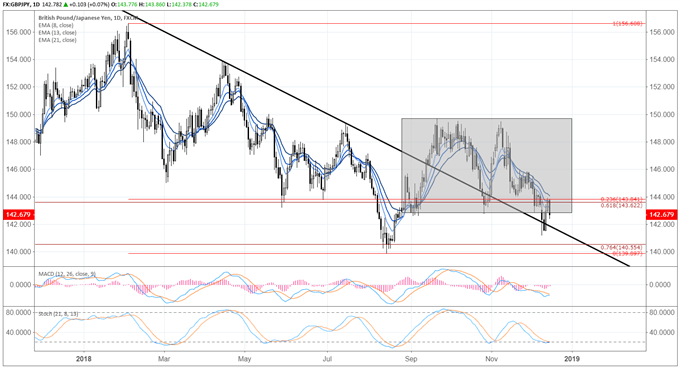 The phrase usually goes, “the good, the bad, and the ugly.” Certainly, GBP/JPY is an ugly chart: lots of two-way volatility, not much of a consistent motivating directional factor. Of course, the undertone here is Brexit. The sheer magnitude of influence that the Brexit negotiations have over any GBP-cross at present time is truly something to behold; not only do technical patterns find little meaningful follow-through, but markets are barely reacting to economic data releases any more. It’s Brexit or bust.

So we say instead, “the good, the bad, and the Brexit.” Let’s face it: as ugly as the GBP/JPY chart is starting to look from a technical perspective – price below its daily 8-, 13-, and 21-EMA envelope while both daily MACD and Slow Stochastics trend lower, all the while price is testing support near 142.60/85 that’s held on numerous occasions since September – it’s not a reliable ugly.

Traders only have faith in technical analysis because there is a tendency for price action to repeat itself. Why? Because human psychology has not changed much from the Tulip Mania to Black Friday to Silver Thursday to White Wednesday to Bitcoin. But with no allegory this time around – no similar price pattern from an historical event like Brexit – traders are left stuck guessing. This strategist’s recommendation: stay away from GBP/JPY, as well as all GBP-crosses, unless you have an iron gut and strong tolerance for risk.