EURUSD Readying Itself for a Move to the 2016 High

Where will EURUSD end the quarter? Check out the Q3 Forecast for our view.

On Friday, the U.S. jobs report jostled the euro, but once the dust settled there was little net change from prior to the release. We’ve been constructive on EURUSD for some time now, and the bias remains the same but with subdued expectations in the short-term. The single-currency rallied sharply the week before last, and on that it was pushed up against substantial price and trend-line resistance. The mid-11400s has been a point of selling interest at different times since February 2015, with the most recent period coming between April and June of last year. The trend-line in reference declines down from August 2015 over the 2016 high to current levels.

This week, after pulling back early, the euro pushed back into resistance once again but stalled in the minutes after the release of the jobs report. A little seesaw price action between resistance and the rising trend-line from April would do some good for setting up another long-trade towards the 2016 high set at over 11600. A consolidation in an uptrend just beneath resistance often times has a bullish outcome as the market reloads the coil for another shot higher.

Solid support arrives by way of not only the April trend-line but also highs carved out during June in the vicinity of 11285/11300. A pullback into this area may not develop, but should it though, we view this as an optimal spot for ‘would-be’ longs given the proximity of stop placement on such an entry (just below support) and eventual price objective (2016 high) with a breakout above resistance. Should we see no backing-and-filling in price action, an alternative entry could come on a daily close above 11445.

To undermine our constructive view, a break below beforementioned support just under 11300 would be required. It might not flip our bias to full-on bearish, but would certainly warrant caution. But until then, the euro looks set to ready itself for a move to levels not seen in over a year. 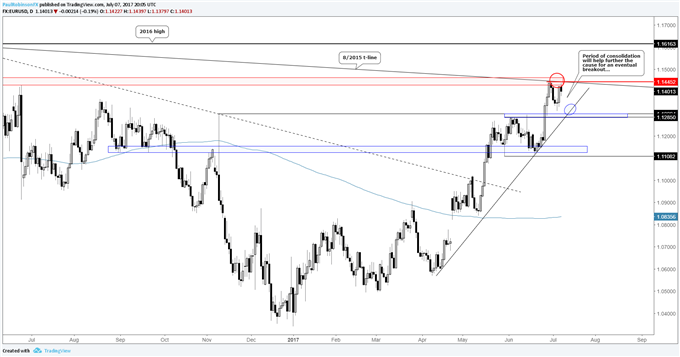