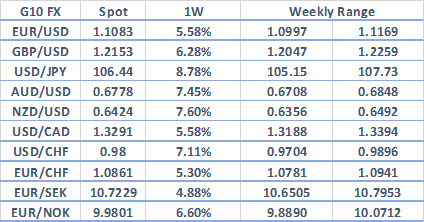 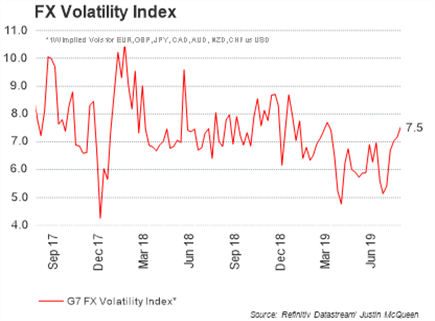 Volatility across the FX space is continuing to pick up with our G7 FX 1-week Implied Volatility Index now at the highest level in 5-months. Recessionary signals have been growing louder with the US 2s10s treasury curve briefly inverting for the first time since 2007, sparking increased investor angst. However, while concerns are justified, there is little reason to panic of an imminent recession as the past 5 inversions have seen a recession follow after roughly 18-months on average (full analysis). Alongside this, the S&P 500 has typically gained initially after a yield curve inversion (full analysis). That said, following the yield curve inversion this will place greater focus on next week’s key event in the form of the Jackson Hole Symposium in which Fed Chair Powell is scheduled to speak on Friday 23rd. 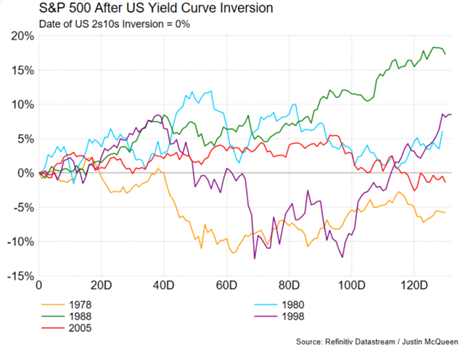 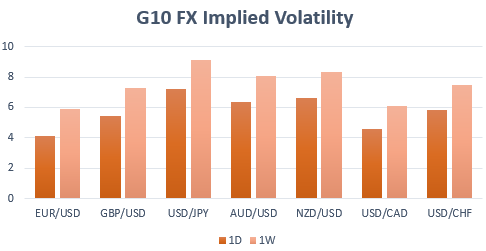 JPY: The Japanese Yen is expected to be among the most volatile currencies next week with 1-week implied vols 9.145, which marks the highest reading since the beginning of the year.

While on the domestic front there will be the release of the Japanese CPI report, typically Japanese data has a rather muted impact on JPY, therefore focus will be on external factors surrounding risk sentiment and also key Fed speakers, which has the propensity to stir volatility in the currency. Fed Chair Powell is scheduled to speak at the Jackson Hole Symposium (Aug 23rd) where eyes will be on the potential for fresh policy signals.

USD/JPY 1-week ATM break-evens imply a move of 108pips(meaning that option traders need to see a move of at least 108pips in either direction in order to realise gains). Risk reversals continue to show a bias for downside protection with JPY calls trading at a premium over JPY puts, however, this has seen a notable pullback from the recent lows of -1.969 to -1.6. 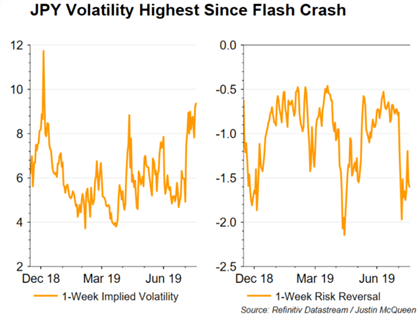