US Recession Watch - US Yield Curve Inverts, But Panic When it Steepens

US 2s10s Treasury Curve Inverts for the First Time Since 2007

The US 2s10s curve has inverted for the first time since 2007, however, this had been a long time coming given the deep inversion in the 3M-10yr curve. Alongside this, while today’s inversion is seen as more symbolic, it does provide yet another reminder in regard to rising fears of a slowdown in the global economy, particularly noted in the global bond market as yields drop towards record lows (US 30yr now yielding an all-time low of 2.06%).

In reaction to the 2s10s inversion, safe havens had benefitted with USDJPY dropping to session lows of 106.13, gold pushed towards its best levels of the day at $1508, while US equity futures headed lower, although moves have been relatively contained thus far. In turn, this increases the importance of next week’s main focus in the form of the Jackson Hole Symposium, which quite fittingly is titled the “Challenges of Monetary Policy”.

While an inversion of the US yield curve has been a reliable indicator for warning of an economic recession, predicting the past 5 recessions and almost all US recessions in the past century. The actual inversion is unlikely to cause an immediate concern given that it usually takes 20 months before a recession hits the economy.

Panic When the Yield Curve Steepens

As mentioned above the US yield curve has been reliable in regard to predicting recessions, however it does not provide a great signal as to when a potential recession will happen. Instead, investors should really fear the yield curve steepener given that it is closer to the actual event, as such, the steepening of a yield provides the near-term signal that a slowdown has arrived. Consequently, over the past 5 recessions the steepening of the yield has happened at a time when a slowdown has been imminent. 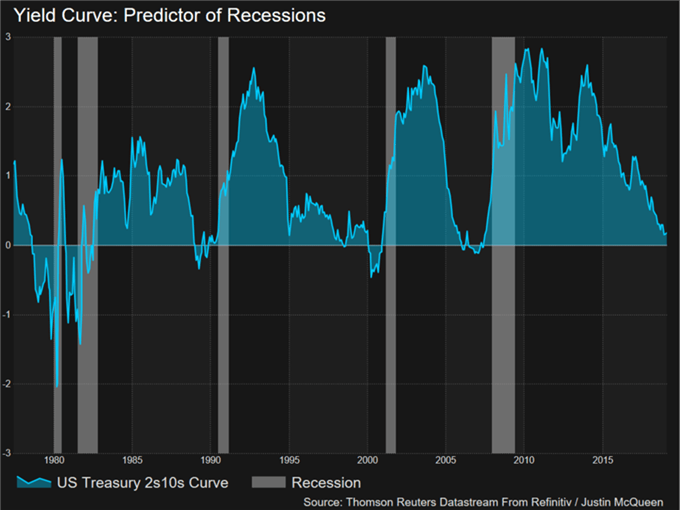