Yesterday, the US Treasury 2s10s curve inverted for the first time since 2007, further emphasising the downside risks that the global economy faces going forward. However, while the Dow Jones closed lower by over 900 points as the recession warnings grow louder, the brief inversion seen yesterday had been a long time coming with the move seen as more symbolic as opposed to significantly altering the economic outlook. Although, with the bond market continuing to show signs of distress, this will place greater focus on next week’s Jackson Hole Symposium, in which the topic is the “Challenges of Monetary Policy”.

As mentioned previously, while an inversion of the US yield curve has been a reliable indicator for warning of an economic recession, predicting the past 5 recessions and almost all US recessions in the past century. The actual inversion is unlikely to cause an immediate concern given that it usually takes 20 months before a recession hits the economy, while US equities peak within 18-months.

What Next for the S&P 500, US Dollar, Gold and Emerging Markets?

When comparing the performance of the S&P 500 in the following 6-months after the past five US 2s10s curve inversion, the index has typically risen, averaging gains of nearly 5%. As a reminder, while the US curve inversion typically signals a looming recession, the timing has been relatively hard to predict thus allowing for the S&P 500 to continue rising.

The US Dollar has tended to gain after an inverted yield curve with the DXY rising as much as 3.5% on average, while gold prices have tended to weaken around 2%. Elsewhere, much like the S&P 500, emerging markets also have found support with the MSCI Emerging Market index rising over 5% on average, based on the last three 2s10s curve inversions. 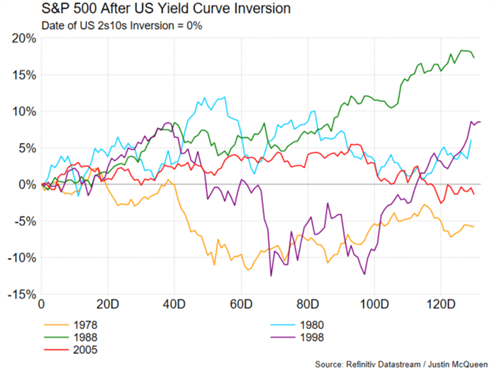 US Dollar Maintains Support After US Curve Inversion 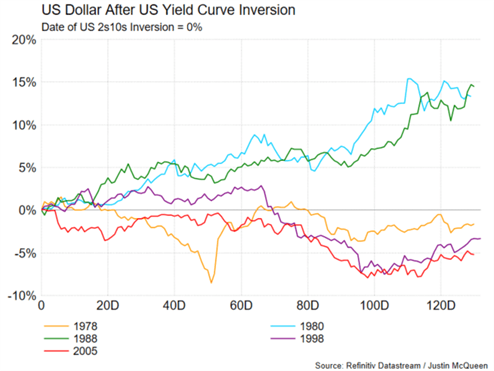 Gold Tends to Weaken Following a US Yield Curve Inversion 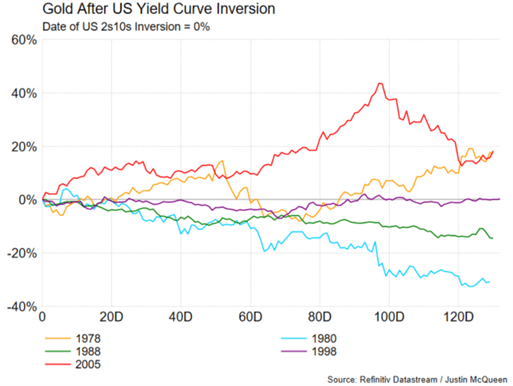 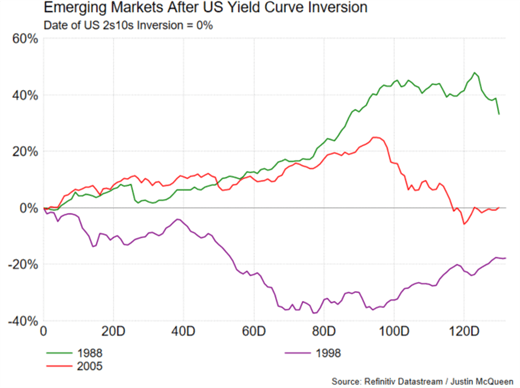