Throughout the month of April, the combination of stability in long-end global bond yields and a surge in global commodity prices, particularly agriculture and a subset of base metals, has provided a sturdy base from which the Mexican Peso has been able to rally. For the most part, price action remains in line with expectations outlined in our 1Q’21 Top Trade Opportunities and 2Q’21 Top Trade Opportunities. With signs that the US economy, Mexico’s largest trading partner, is gaining steam, the Mexican Peso remains a potentially attractive proxy play in a risk-on environment.

The top risk for markets across the board this week is the April Fed rate decision, which culminates today at 14 EDT/18 GMT. While USD/MXN will be directly impacted thanks to the USD component of the pair, it is likely that all MXN-crosses are impact given the proximity of the Mexican economy to the US economy. Accordingly, if the Fed strikes an optimistic tone about growth while still promising to provide stimulus, it may curate an environment where the US Dollar falls and US Treasury yields rally – a sign that inflation expectations are influencing price action, likely resulting in lower real US yields.

Attention does return to domestic Mexican data by the end of the week, with the release of the 1Q’21 Mexican growth rate on Friday, April 30. Consensus forecasts call for a contraction of -3.5% from -4.3% (y/y) previously. Considering the nature of market participants right now is to look to the other side of the pandemic, evidence of a weaker Mexican economy at the start of 2021 may not dissuade Peso bulls just yet. 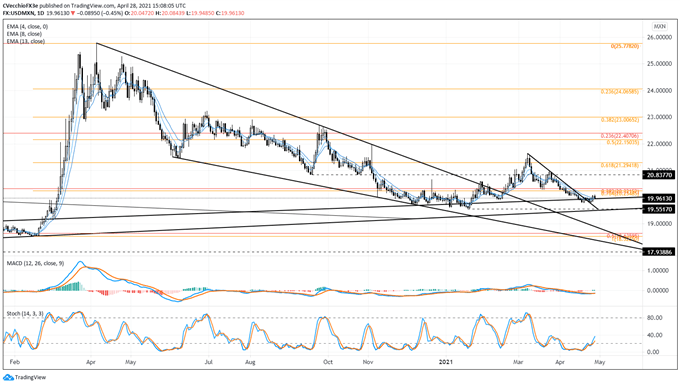 In the prior Mexican peso forecast, it was noted that “the uptrend from the January, February, and March swing lows has been lost…if price action since early-March has resolved itself in the form of a potential head and shoulders pattern, it would hold that more downside towards the yearly lows may be in the cards.” While a drop to yearly lows has not transpired, USD/MXN rates are still below the potential neckline as well as two key Fibonacci levels: the 38.2% retracement of the April 2011 low/April 2020 high range at 20.3215; and the 76.4% retracement of the 2020 low/high range at 20.2349. To this end, even though the downtrend from the intramonth March 2021 highs was broken, the technical structure remains bearish. 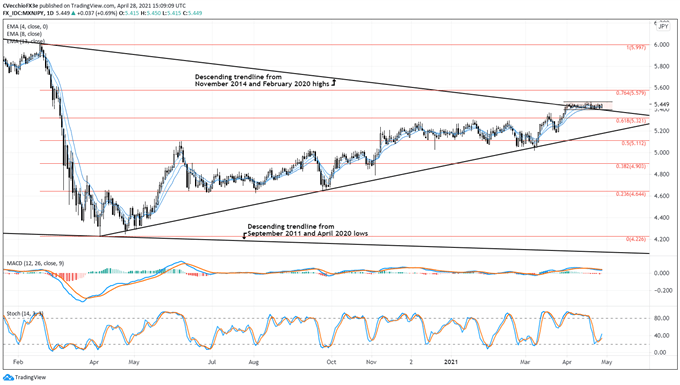 Accordingly, price action remains bullish for MXN/JPY rates. The pair is above its daily 5-, 8-, 13-, and 21-EMA envelope, which is in bullish sequential order. Daily MACD is holding above its signal line during its pullback, even as price action retains its gains. Meanwhile, daily Slow Stochastics are trending higher from oversold territory; it’s noteworthy that the decline to oversold territory was not accompanied by a drop in price.

It remains the case that “given this context, the recent sideways drift in MXN/JPY rates over the past few days may simply be a pause before fresh highs are reached anew. The 76.4% Fibonacci retracement of the 2020 high/low range at 5.579 may be initial resistance if the bullish breakout ensues.” 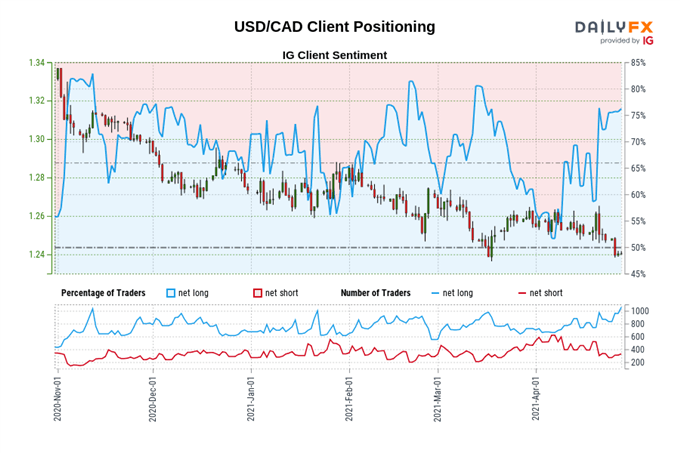