Gold has been a difficult market to get a handle on the past couple of months given the indecisiveness in its price action. The chop-fest following the spike high in February was to be expected given how quickly it had risen from December up until that point.

During the sideways period many had viewed as a bullish consolidation (self-included), a disturbing development was underway. Speculators (hedge funds, trend followers) have been piling into gold futures at a pace which pushed their net long position to the highest levels on record. (Jamie Saettele went over this on Monday.)

Typically, in the past when gold has undergone a corrective phase following a large move, market positioning would back off, allowing for a ‘reload’ so to speak, for a continuation in the direction of the prevailing trend. But in this case, while the ‘specs’ positioning continued to increase in size, gold went virtually nowhere.

Commercial hedgers, entities with exposure to the physical gold market, have also been increasing their hedge (short position) in nearly equally impressive fashion.

One might think the hedgers are simply selling to the speculators, hence the lack of price movement, but it doesn’t quite work like that. The current situation is similar to the one in December prior to "lift-off", except in reverse.

At some point something has to give. That point looks like it could be now. We could be in for more of the same-ole chop, but with such a large bearish skew in market positioning, the bias is lower at this time regardless of how its flight path might play out. 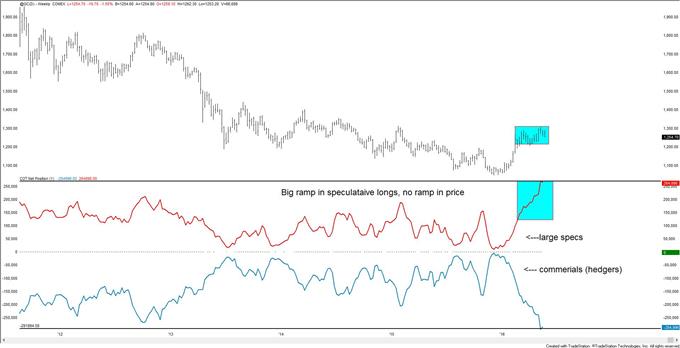 Yesterday, prior to the release of the more hawkish-than-expected FOMC minutes, gold was once again continuing its multi-day tight-rope on trend support running back to January, but by day’s end that was no longer the case – it broke.

In overnight trade, gold is breaking below minor support around 1256. The next level of support on further weakness comes in by way of a lower parallel in the 1230s, below there we will start looking towards the 3/28 swing low around 1205, and then below there the most critical level will be around 1191.

What will tilt the view to the upside? Until we see a correction in market positioning it is difficult at this time to imagine gold moving higher in a sustainable fashion.

Find out what qualities profitable traders possess in our free guide, "Traits of Successful Traders."