A couple of weeks ago in an article and again in a video made yesterday, I discussed the prospects of higher gold following the conclusion of the two-day FOMC meeting ending tomorrow. The thesis is built on a foundation of confluences between technical and market positioning/sentiment factors aligning with a major fundamental catalyst. Today we will look at it in a bit more detail...

Futures markets, through the Commitment of Traders report (COT), show large speculators (hedge funds), in aggregate, holding their smallest long position in over a decade after weeks of quickly abandoning their long bias on rising speculation of a December “lift-off’. Commercial traders (hedgers) covered nearly all their short hedges (smallest in 15 years), indicating they do not believe they require as much protection at this time against further price erosion.

The extreme shift in market positioning coincides with a pair of long-term bottom-side trend-lines. (Drawn below in two degrees, daily/weekly.) Furthermore, an ‘inverse head-and-shoulders’ pattern has been under development for the past month. 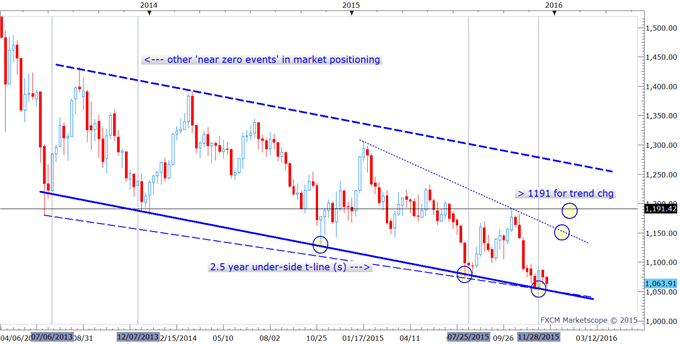 The inverse 'head-and-shoulders' formation will be triggered on a daily closing bar above 1088. The height of the pattern points to an approximate move of $43, or target of 1132. Although, given the extreme in positioning the potential for a larger advance is certainly there.

If the pattern does not trigger and sellers emerge, then the targeted area of support once again becomes the under-side trend-line(s) in the 1045/35 vicinity. Should we reach those levels we will wait for some type of sign the market wants to reverse. This signaling could come by way of a key reversal bar, engulfing bar, or some other bullish technical event which we can hang our hats on. 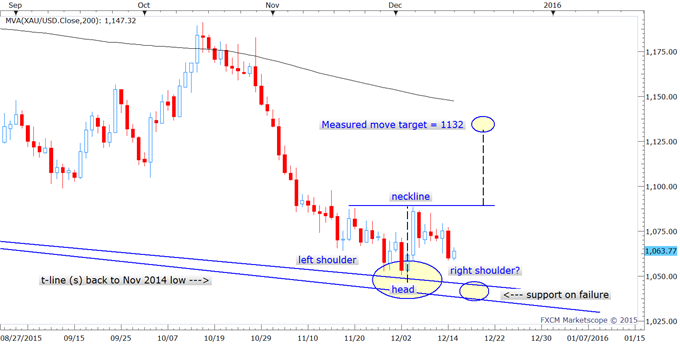 At this time, given the pervasive down-trend in place since the 2011 peak, we can only expect any move higher which may unfold to be of the counter-trend variety within the context of the ongoing bear market. Should gold make a higher high above 1191, demonstrating a potential change in character in its price sequence of lower highs and lower lows over the past few years, then we can begin to examine the possibility of a broader change in trend.

Tomorrow's FOMC outcome to act as a catalyst

A couple of different scenarios could unfold following the FOMC meeting. While it is widely expected the Fed will raise rates, what is not so clear is the path the Fed will take after embarking on a tightening cycle.

If the Fed signals an even more gradual pace of rate increases than the market expects, we will likely see an immediate sell-off in the dollar and rise in precious metals.

However, if the signaling is more hawkish than expected, we could see further selling in precious metals, resulting in a possible capitulation bottom at some point in gold.

While I am not here to make a prediction on what the Fed will do or say (although I’m thinking more dovish than hawkish), based on either outcome, it looks more probable than not with the sentiment and technical backdrop we will see a low form surrounding this meeting one way or another.

Tomorrow I will discuss silver.