Elon Musk offloaded USD6.9 billion of stock in Tesla Inc. (TSLA) the billionaire’s biggest sale on record. The billionaire boosted his legal war chest as he prepares to go to court in October. Musk clarified the sale stating that "In the (hopefully unlikely) event that Twitter forces this deal to close and some equity partners don’t come through, it is important to avoid an emergency sale of Tesla stock," he said in a tweet late on Tuesday. The latest sales bring total Tesla stock sales by Musk to about USD32 billion in less than one year. 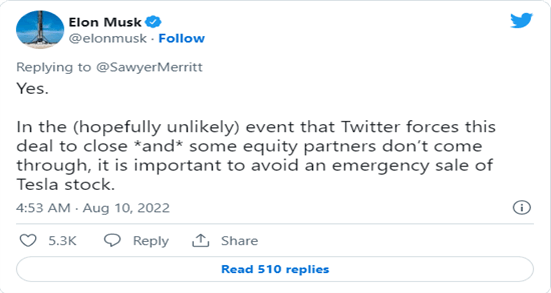 After accumulating a more than 9% stake in Twitter in the first three months of the year, Musk offered to take it private with a USD43.4 billion all-cash offer on April 14. The offer at that time was USD54.20 per share, but Musk tried hard to renegotiate the deal after TWTR stock fell to the USD30s. The worry around the Twitter acquisition was whether Musk was spreading himself thin and would neglect ‘the baby’ (Tesla Inc.). The billionaire last month said he was terminating the agreement to buy the social network where he amassed a large following, over allegations of “misleading representations” over the number of spam bots on the service.

This resulted in a public spat between Musk and Twitter with the world’s richest man saying that the platform's stance that less than 5% of its users are bots is a lie. Musk has stated in the past that the figure is closer to 20%. This has resulted in Twitter inc. suing Musk to make good on the deal with a trial date set for October. The Twitter deal included a clause that would make Musk liable upto USD1 billion under certain conditions, with ongoing debate amongst legal professionals as to whether the spam bots are enough to allow Musk to walk away from the deal.

Meanwhile, Musk’s ongoing shenanigans have begun to take a toll on would-be-buyers, Investors and current Tesla owners. Since making Tesla and himself so synonymous with one another (as Tesla does not use normal marketing methods), Musk has leaned into political conflicts, attempted to buy one of the world’s most influential social media platforms and struggled to bounce back from unflattering coverage of his personal life, putting the company’s increasingly valuable brand at risk.

From a technical perspective we have seen Tesla flirt with the USD600 price level with the year-to-date lows around USD620. This sits just above the pre-covid lows around USD540 which should remain a significant level following on from last year’s rally.

Last month saw a bullish engulfing candle close off while maintaining bullish price action (higher highs and higher lows) on the daily timeframe as well as trading above the 100-SMA. Price action looks bullish and with continued improvement in market sentiment we could see further upside. A daily candle close below USD760 will see a change in structure and the potential to for sub USD600 and a potential test of pre-covid prices.

Tesla has been in the driving seat for the past decade due to a lack of competitors that simply fell short of Tesla’s quality and battery technology. Consumers put off by Musk’s mischief had few EVs to turn to. As the more traditional automakers introduce more capable electric models, Tesla won’t have asmuch leeway moving forward. With a challenging Macro environment in play globally, coupled with growing uncertainty between US-China relations Tesla could be in for a bumpy ride ahead.

If Musk’s stock sale is accompanied by a definitive agreement that puts the Twitter mess behind him, Tesla could rally. A definitive end to Twitter would remove so called ‘distractions’ allowing Musk to focus more on ‘his baby’ which made him the world’s richest man. Given the current uncertain economic climate Investors prefer safety, while Musk’s eccentric behavior which made him a household name now proving a challenge.