DAX 40 Struggles as Earnings and Gas Cuts Weigh on Sentiment

EU Nations Sign off on Agreement to Reduce Gas Use for Next Winter.

DAX 40: Struggles as Earnings and Gas Cuts Weigh on Sentiment

The DAX followed European stocks slightly lower in early European trade, dragged down by disappointing earnings from Swiss banking giant UBS and wariness over an upcoming Federal Reserve policy decision. The index itself was struggling as news continued filtering through from yesterday that supplies through the key Nord Stream 1 pipeline are set to drop to around 20% of capacity from Wednesday, with Gazprom PJSC saying that one more turbine is due for maintenance and will be taken out of service. That’s made the chances that EU countries will be able to reach their 80% gas storage filling target even more unlikely, raising the stakes for cutting gas demand. The new rules are “an unprecedented step in European solidarity,” said Sven Giegold, a deputy German economy minister. A halt of Russian gas supplies to the EU could potentially reduce its gross domestic product by as much as 1.5% if the winter is cold and the region fails to take preventive measures to save energy, the commission estimated with the German industrialized economy potentially suffering more harm.

Europe’s biggest airline Deutsche Lufthansa AG will cancel almost all flights from its main German hubs in Frankfurt and Munich Wednesday because of a strike by ground crew, exacerbating the chaos that has snarled Europe’s crucial summer travel season. The total number of flights at this stage is around 1000 between the two cities which may linger till the weekend. Europe’s summer usually boosted by tourism has seen many challenges with travel which is holding back the Eurozone economy, an economy already struggling due to a multitude of factors.

As European earnings season starts to pick up, we have had UBS Group AG reporting a weaker-than-expected profit in the second quarter, as the global market sell-off kept wealthy clients on the sidelines and institutional investors pulled funds. However, the key focus of the week remains on the Fed. The U.S. Central Bank is widely expected to hike by at least 75 basis points on Wednesday as it looks to tame galloping inflation. The FOMC statement and accompanying press conference by Fed Chair Jerome Powell will also be studied carefully amid fears that these sharp interest rate rises will plunge the world’s largest economy and major global growth driver into recession. 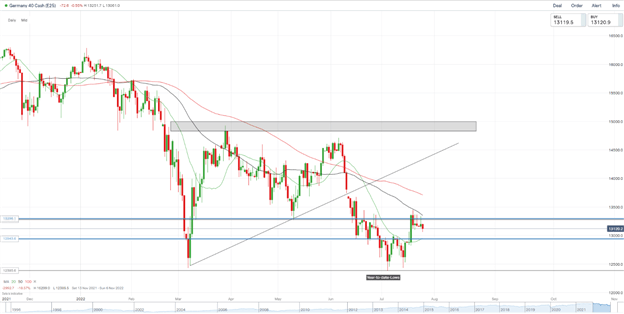 From a technical perspective, last week’s bullish candle close failed to close above the resistance area 13300 which we rejected yesterday before declining further. On the daily chart price remains compressed between the 20-SMA which rests on the key psychological level (13000) and the 50-SMA. Without a definitive candle break and close above these levels we remain rangebound as sentiment continues to shift.

The 2H chart on the other hand saw a break below the grey box within which price appeared to be consolidating. We have however bounced of the 100-SMA which would need a candle close above the13200 resistance area before looking higher. A rejection of the grey box may lead to further downside, as currently being married to a bias is not feasible given market conditions.