The Dax traded lower in European trade before recovering to post gains of 1.1% for the session. The European Central Bank (ECB) climate stress test flagged a $71 billion risk to eurozone banks. "Far more people across Europe are going to struggle to repay their mortgages in the coming years than the ECB’s results today suggest," said Stanislas Jourdan, executive director of Positive Money Europe.

In other news the outline of a so-called anti-fragmentation tool, which will be called the Transmission Protection Mechanism, is expected to be unveiled at the next ECB governing council meeting on July 21.

Green dominates the sectoral breakdown, led by consumer cyclicals with gains of 2.5% while real estate lags in red, down 1.8%. 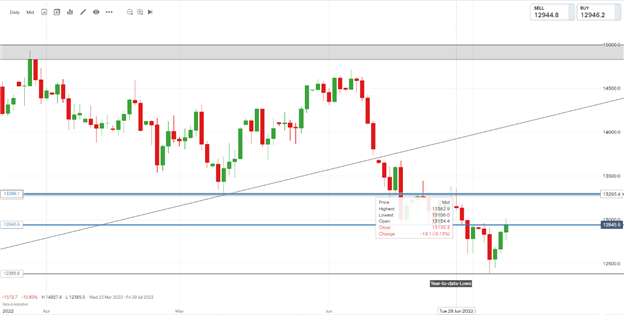 The FTSE gave back some of its recent gains with politics and economics making headlines today. In the UK, eyes are fixed firmly on the race to succeed Boris Johnson as PM with Johnson staying on to the autumn until a replacement is found.Five so far have officially announced their candidature, though none yet of any of the big hitters from Johnson's government.

On the economic front, The Office for Budget Responsibility (OBR) said the UK faces the risk of recession from cost crunch and ballooning debt burden, warning government debt levels could more than treble unless taxes are hiked.

The blue-chip index posted losses around of 1% for the session, while the sectoral breakdown is predominantly red as basic materials and energy lead the way with losses of 4% and 3% respectively.

The FTSE closed last week as a doji candlestick signaling indecision may be ahead. Yesterday we continued our push higher without testing the 38.2% fib level and remain rangebound. As we push lower in European trade, the 23.6% fib level should provide support. A break below could open up a test of support and an opportunity within the range. We have been ranging between the 0% and 50% fib level since the 10th of June which might be worth remembering if we do reach that level.

The Dow traded largely flat in premarket as the US jobs report remained in focus. The NFP numbers exceeded expectations but seemed to have a relatively muted effect on the Dow as it fueled rate-hike bets. Labor-market data has shown early signs of softening, but investors are mixed on the report. Bloomberg economists are factoring in the possibility that slightly softer data will prompt the central bank to go back to 50 basis point moves, even after the report showed job gains topped analyst estimates. Others see the recent data as a signal that fears of recession are overblown and say that the downshift may be too modest to shake the Fed from its path.

On the calendar front we have wholesale inventories followed by US Federal Reserve Member John C. Williams before wrapping up with consumer credit change. 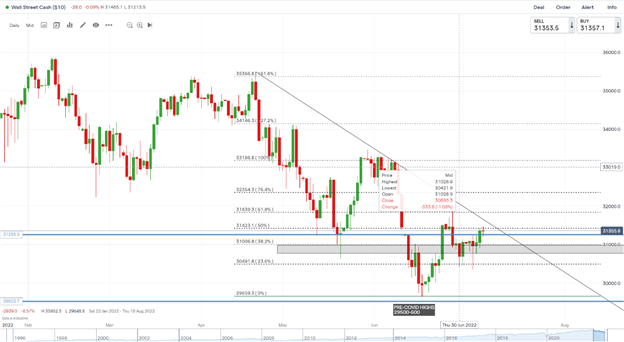