Tesla CEO Elon Musk is back in the news again with Twitter polls, stories about his brother selling Tesla stock, and Michael Burry’s suggestions hitting the stock price hard.

A bad week for Elon Musk gets seemingly worse, with shares in Tesla slumping around 17% since the high point at the start of the month. Musk offered to sell 10% of his Tesla stock in a Twitter poll over the weekend if supported – it was – leaving the Tesla CEO with around 17.5 million shares to offload. Including stock options, Musk owns around 23% of Tesla.

And Elon Musk was not the only, potential, seller of Tesla shares of late with his brother, and board member, Kimbal Musk selling a chunk of stock before his brother Elon announced the Twitter poll. According to an SEC filing last Friday. Kimbal Musk sold around $109 million of Tesla shares between $1,223 and $1,236 according to the filing, compared to a current spot price of around $1,030. 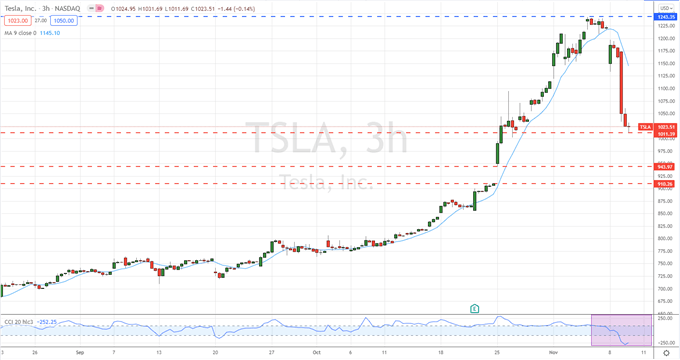 The latest chart shows the steep sell-off in Tesla with the stock now below the nine-day moving average and just above $1,000. Lower down there is a gap on the charts between $910 and $944 and sellers may be attracted to this zone, despite the CCI indicator showing Tesla as heavily oversold.

Noted short-seller Michael Burry has also entered the Tesla fray again, suggesting that Elon Musk may be selling Tesla shares to cover personal loans taken out against his shares. The head of Scion Asset Management is not new to Tesla with an updated regulatory filing in August showing that Scion had puts on 1.1 million Tesla shares – an option to sell Tesla shares short – an increase from 800,000 shares at the end of March. Burry later told CNBC via email, in mid-October, that this position was just a trade and that he was never short ‘tens or hundreds of millions of any of these things, as reported’ with the options bets ‘extremely asymmetric’, and that the media was off by ‘orders of magnitude’. It is not known if Scion continues to hold all or any part of this position, if it is/was fully hedged, or at what strike price or expiration date the options were struck at.

While all of these actions, and subsequent stories and tweets, may well be a coincidence, what is not in doubt is that the share price has taken some or all of these incidents badly.

What is your view on TESLA (TSLA) – bullish or bearish?? You can let us know via the form at the end of this piece or you can contact the author via Twitter @nickcawley1.