Dogecoin surged just under 20% higher in the last 24 hours, buoyed by Twitter endorsements from Tesla CEO Elon Musk and Dallas Mavericks owner Mark Cuban. The digital asset, originally started as a parody back in 2013, has been a star performer in the cryptocurrency market, surging 9,558% since the start of the year.

This remarkable climb higher appears to have been driven by pure speculation, with the same Reddit-fuelled frenzy that led to Gamestop (GME) shares rocketing just under 3,000% higher partly to blame. Loose monetary policy conditions and substantial fiscal support has also proved to be the perfect backdrop for speculative assets to soar in recent months.

That being said, Mark Cuban’s recent comments may prove to be the justification needed to ignite an even more aggressive topside push for the digital asset. The well-known entrepreneur stated that “Doge is the one coin that people actually use for transactions”, and has facilitated the purchase of Dallas Mavericks tickets and merchandise using the cryptocurrency. 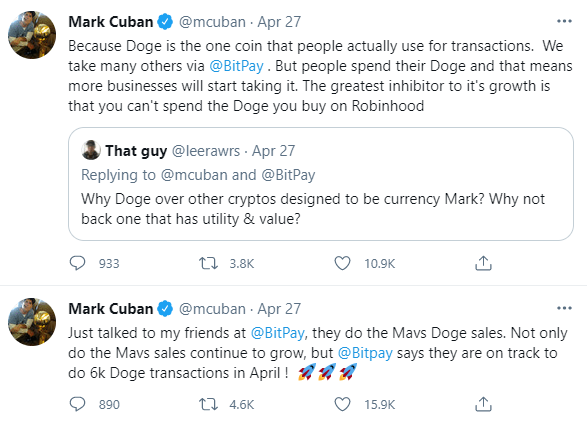 Elon Musk has also been a prominent supporter of Doge in his self-proclamation as “the Dogefather”, frequently tweeting that is his favourite crypto and is in fact “the people’s crypto”. In the meantime, the gold-standard in the cryptocurrency market, Bitcoin, has slipped significantly lower since bursting to fresh record highs on April 14.

News of the US Treasury opening an investigation into instances of monetary laundering through the use of digital assets, and a blackout in the Bitcoin mining region of Xinjian in China, seemed to be the initial catalysts triggering a wave of selling.

The Federal Reserve’s upgraded economic outlook could also weigh on the liquidity-sensitive cryptocurrency in the weeks ahead, as the central bank held its monetary policy levers steady at its meeting overnight. With the prospect of further easing relatively unlikely, the price of Bitcoin may be vulnerable to a more extensive pullback.

From a technical perspective, Dogecoin’s outlook appears overtly bullish, as price consolidates in a Bull Flag continuation pattern above key support at the 50% Fibonacci (0.2407).

With volume notably declining throughout the recent pullback, and the MACD and RSI tracking firmly above their respective neutral midpoints, the path of least resistance seems skewed to the topside.

A daily close above the yearly high (0.4481) is required to validate the bullish continuation pattern and carve a path for price to challenge the 100% Fibonacci (0.5619). The pattern’s implied measured move suggests that buyers could drive the price to test the 161.8% Fibonacci (0.8132).

Bitcoin prices, on the other hand, could be at risk of a more extensive correction lower, as buyers fail to drive the cryptocurrency back above the psychologically pivotal 56,000 handle and the 21- and 34-day EMAs.

With the slopes of the longer-term moving averages notably plateauing, and the RSI and MACD travelling below their respective neutral midpoints, further losses appear at hand.

Slipping back below 50,000 probably intensifies near term selling pressure and generates a downside push to challenge the sentiment-defining 144-MA (43729). Hurdling that brings the 50% Fibonacci (29799) into the crosshairs.