The listing of Coinbase on the Nasdaq last week was a pivotal moment for cryptocurrencies. This has placed the largest crypto exchange on the same level as many plain vanilla exchanges around the world. It’s a powerful message that new digital coins are being accepted into mainstream finance. But has that taken away their exotic appeal?

The focus around Coinbase’s listing was the legitimacy of the exchange and the sign of approval from financial markets. Bitcoin is over 10 years old now and it has entered a phase of maturity, which means that it no longer should be seen as the new kid on the block that is different from everyone else. And with this maturity, there is a large chance that some of its excitement will vanish because people are usually more interested in shiny new things.

The more common cryptocurrencies have been on a clear path lower since the listing took place, with Bitcoin down over 15% since its high last week, and Ethereum coming off just over 19%.

But there seems to be a new obsession in the crypto space and that is Dogecoin, a digital coin that started as a mockery about the craziness in the cryptocurrency world. Last week we saw a group effort to get the coin to 10 cents of a dollar. As expected, that level was surpassed with ease and we are now presented with a specific day chosen to get the coin to $1, known in the fintwit world as #Dogeday.

The funny thing is that this coin ins’t new, it has been around since 2013, but it has spent most of its 7 years of existence trading below a cent on the dollar. The sudden interest in Dogecoin seems to have stemmed from public figures like Elon Musk and companies like Slim Jim, and Snickers.

Looking at the daily DOG/USD chart, there is a clear ascending trendline in play which is offering support as buyers pile in, so it is not a crazy assumption to believe that the digital coin may actually reach the $1 mark during today’s session. 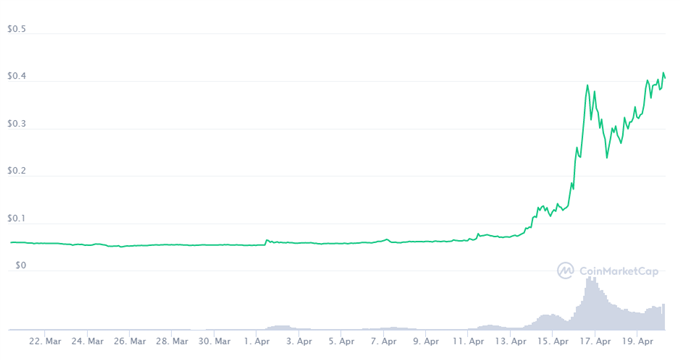 Bitcoin, the largest and most-known cryptocurrency, continues to fall from its recent record high, threatening to return to the $50,000 mark if selling interest continues. As I was mentioning earlier, the listing of Coinbase means that the crypto world is becoming widely accepted, which may take some of the edge off Bitcoin. That said, this retracement is likely to mean a good entry point for new buyers, so I wouldn’t be surprised if we see a sharp reversal in the next few days as the crypto world remains on everyone’s radar.

We could also be witnessing a rotation out from Bitcoin into newer more exciting digital coins like Dogecoin, which would mean that BTC/USD could continue falling. In that case, I would focus on the $50,000 mark as the coin seems to be moving in 5k increments. Before then, support could arise at Sunday’s low ($52,303) followed by the low seen on March 25th at $50,456.