Speculative fever seems to have moved away from the cryptocurrency space in the past few days to single name stocks, including GameStop and AMC, and now silver as the reddit retail army continues to fuel volatility. Some cryptos, mainly Ripple (XRP) and Dogecoin (DOGE) have been caught up in the recent retail frenzy, while Bitcoin had a moment at the end of last week when Elon Musk added Bitcoin to his Twitter handle.

Last week we noted that Bitcoin had made a ‘gravestone doji’ a negative technical set-up. This played out in the short-term with BTC falling around $4,000 to a low of $29,150 two days later before support off the 50-day simple moving average halted the move. And it is another moving average, the 20-day sma, that is now blocking the upside in the short-term, causing the price range to contract as the 20- and 50-day sma converge. While BTC remains under the short-dated sma, then the path of least resistance for Bitcoin is lower. 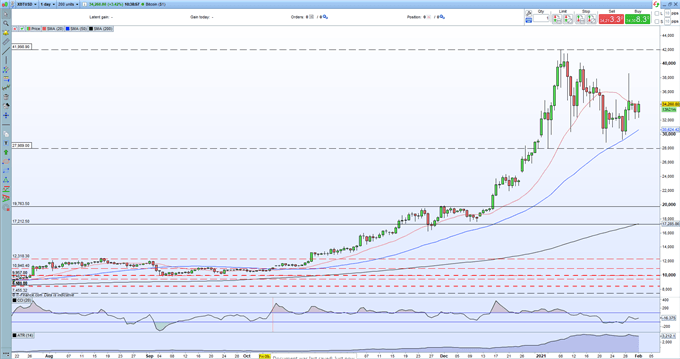 We typically take a contrarian view to crowd sentiment, and the fact traders are net-long suggests Bitcoin prices may continue to fall.Traders are further net-long than yesterday and last week, and the combination of current sentiment and recent changes gives us a stronger Bitcoin-bearish contrarian trading bias.

The recent Ethereum rally has paused over the last week but the second-largest cryptocurrency still retains its bullish bias. While the series of higher highs have been broken, the series of higher lows remains in place, supporting current price action. The spot price has tested and bounced off the 20-day sma and while this remains the case then Ethereum can move higher with a re-test of the recent high not out of the question. Below the 20-day sma, there is reasonable support from a cluster of lows between $1,200 and $1,220.

Popular Moving Averages and How to Use Them 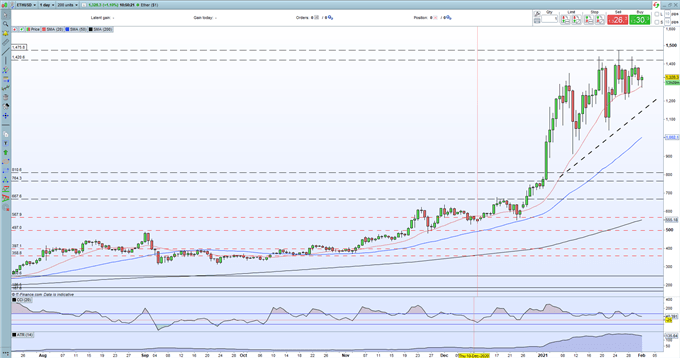