A series of tweets from BitMEX Research over the possibility of a ‘double spend’ Bitcoin occurrence sent the largest cryptocurrency crashing back below $30,000 early today. A ‘double spend’ is an occurrence when one party is able to spend the same bitcoin twice. According to reports, the initial fears of a double spend occurrence were unfounded with sources later saying the confusion was caused by two blocks being mined simultaneously. While Bitcoin’s price has since stabilized, there remains huge volatility in the cryptocurrency space and prices will continue to swing around wildly in the short-term. This week Bitcoin has traded in a near-$14,000 range and further downside may be on the cards if the latest rally stalls.

In other more positive news, Blackrock, the world’s largest asset manager, said on Wednesday that it will allow two of its funds to invest in Bitcoin futures, for both hedging and speculative purposes.

The 20-day simple moving average has now been broken decisively to the downside for the first time in many months, while the 50-day sma now sits at $27,762, just below a potential level of support around $27,940. Volatility remains just below its all-time high, while the recent sell-off has pushed the market into oversold territory for the first time since September last year. If Bitcoin is to resume its recent rally, support at $27,762 needs to hold.

How to Measure Volatility 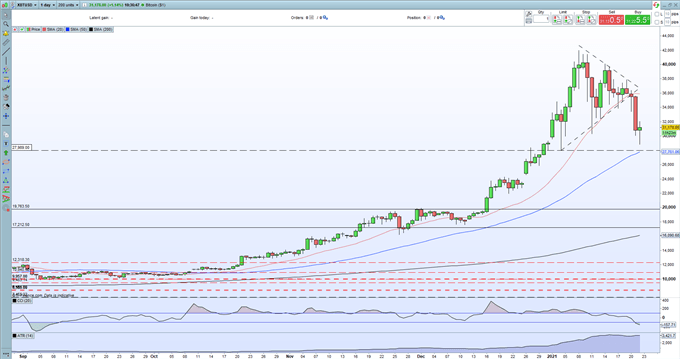 Retail trader data show 82.94% of traders are net-long with the ratio of traders long to short at 4.86 to 1. We typically take a contrarian view to crowd sentiment, and the fact traders are net-long suggests Bitcoin prices may continue to fall.Positioning is less net-long than yesterday but more net-long from last week. The combination of current sentiment and recent changes gives us a further mixed Bitcoin trading bias.

What are your views on Bitcoin (BTC) – bullish or bearish?? You can let us know via the form at the end of this piece or you can contact the author via Twitter @nickcawley1.