A Democratic Sweep the Most Likely Outcome Amid Georgia Results

The Democrats look set to take full control of Congress with the party on course to win both Georgia seats. As it stands currently, Democrat Raphel Warnock has won the first of two Senates, ousting Republican Kelly Loeffler. Meanwhile, outlets such as Decision Desk have called a victory for Democrat Jon Ossoff over Republican David Perdue. However, with voting not yet completed (scheduled to restart at 1300GMT/0800ET) the race does remain to close to official call. That said, bookmakers look to have called the race with PredictIt showing 96/4 in favour of a Democrat win.

How Will Congress Look

Once confirmed that the Democrats have won the runoff elections, the extra two seats would see the Senate split 50-50, giving the Vice-President the deciding vote in the event of a deadlock scenario. The importance of this is that it will pave the way for Biden’s policies to pass through Congress with relative ease, particularly a future fiscal stimulus package.

As I noted yesterday, the clearest view of a blue wave scenario would be for US Treasury yields to spike higher amid the rising prospect of more fiscal stimulus. In turn, with a Democrat sweep the most likely outcome, US 10yr yields have broken above the psychological 1% level (highest since March 2020), while the 2s10s curve is now at its steepest since the back-end of 2017. That said, with US 10s hitting 1.02%, this has been a level previously touted to spark sizeable momentum selling in US Treasury Futures. 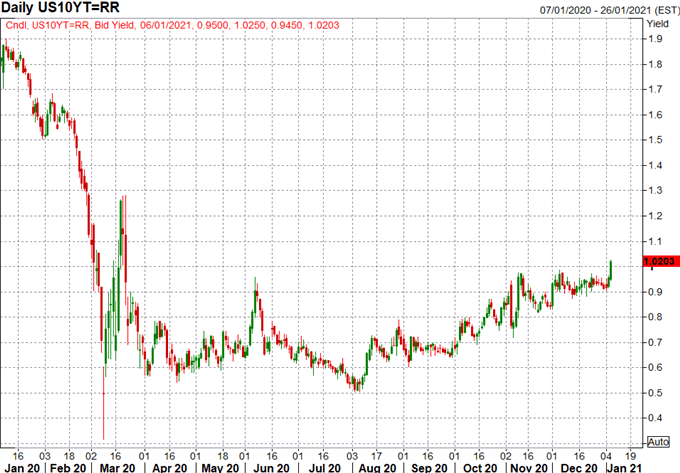 Nasdaq 100 Breaks Down Amid Rotation into Value Stocks

In the equity space, the Nasdaq 100 (-1.8%) is the notable underperformer as markets reprice the possibility of higher corporation tax and regulatory risks, which could see large tech come under greater scrutiny. As such, the rotation trade looks to be back in vogue with value outperforming growth (Russell 2000 +1.8% vs Nasdaq 100 -1.8%). That said, the likelihood of such a material tax increase appears slim, given that this will be a 50-50 Senate, meaning that it would only take one Conservative Democrat to block a tax hike. Alongside this, the current backdrop regarding the global pandemic also reduces the urgency to consider higher taxes in the short-run. 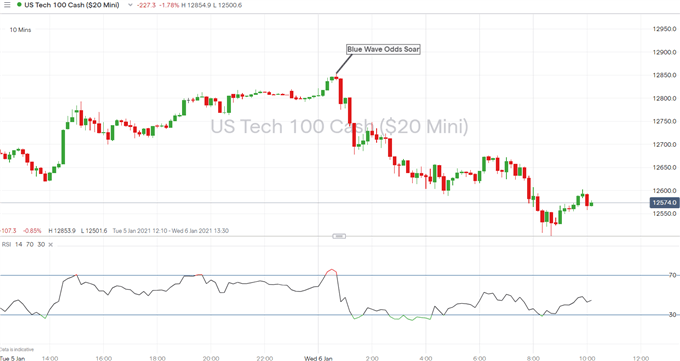 As for FX, the losses on the US Dollar have accelerated, albeit the move has been relatively tame thus far. However, it does embolden the consensus view of a weaker USD, raising the risk a move towards the March 2018 lows situated at 88.58. Alongside this, the high-beta pairs (AUD, NZD) are outperforming as to be expected. 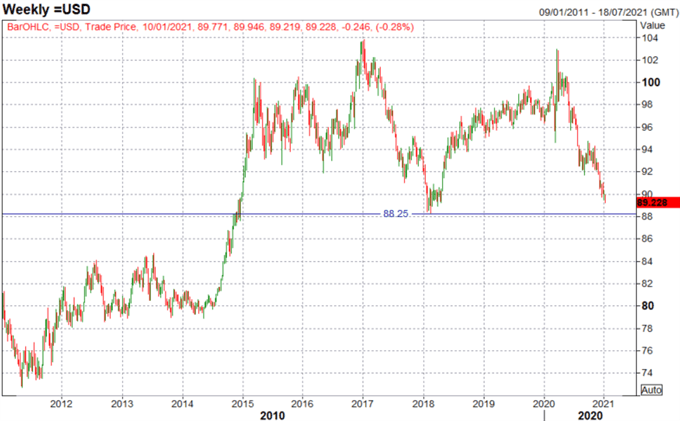