Risk Events for January: Why the Georgia Senate Runoff is Key for Financial Markets

Georgia runoff elections to the US Senate (Jan 5th)

US politics will be among the key risk events for the month, with the runoff elections in Georgia, which will determine the party that will control the Senate over the next 2 years. This is very important for financial markets given that this will impact how much of Biden’s policies can pass through Congress, including the size of a future fiscal stimulus package.

As it stands, the November elections saw Republicans win 50 seats with Democrats winning 48 seats, while 2 seats in Georgia were left unfilled as both candidates failed to reach 50% of the votes. If Democrats win the runoff elections, the extra two seats would effectively give them control of the Senate as a 50-50 tie would give VP-Elect Kamala Harris the deciding vote. In this scenario, the US Dollar would likely see losses accelerate, while high-beta currencies (AUD, NZD) would be expected to outperform. However, Republicans need to win just one seat to maintain control of the Senate.

According to recent polling data, support for Democrats look to have picked up with both candidates showing a slight lead of 1.8 and 2.2ppts. The graphic below highlights how a Biden Presidency could differ under a Republican or Democratic-controlled Senate.

What Biden Will Markets Get? 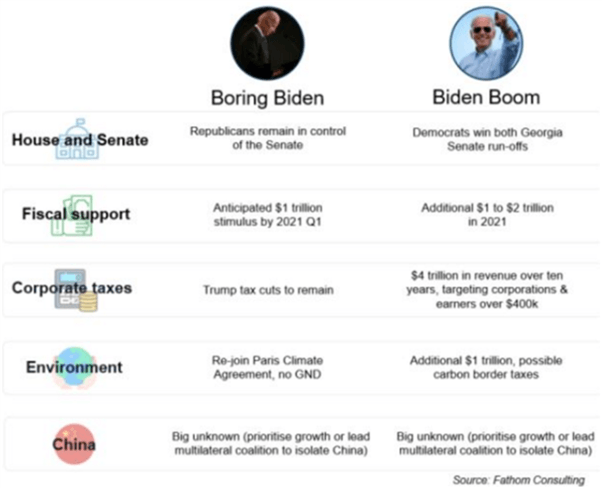 The new year will see four regional Fed Presidents rotate into voting spots from January. This will see Fed’s Mester (Hawk),Kashkari (Dove), Kaplan (Neutral) and Harker (Neutral) replaced by Evans (Dovish),Daly (Neutral),Bostic (Dovish), and Barkin (Neutral). However, while this will see slightly more dovish rate-setters, this will unlikely provide a notable shift in the trajectory of current monetary policy. That said, the more dovish members may be more inclined to look through any inflation as transitory and thus remain in favour of very accommodative for the foreseeable future.

The Importance of the FOMC 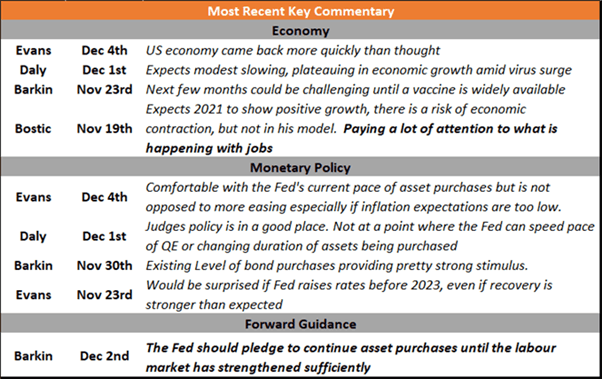 In Q3, the US economy saw mechanical growth from an unwind of lockdown measures, resulting in a 33.4% annualised rise in GDP. However, following a resurgence in virus cases in the US, alongside a lack of a substantial relief package, GDP is expected to have moderate in Q4. Of note, the Atlanta Fed GDPNow tracker estimates that real GDP growth (seasonally adjusted annual rate) in Q4 is 10.4%. 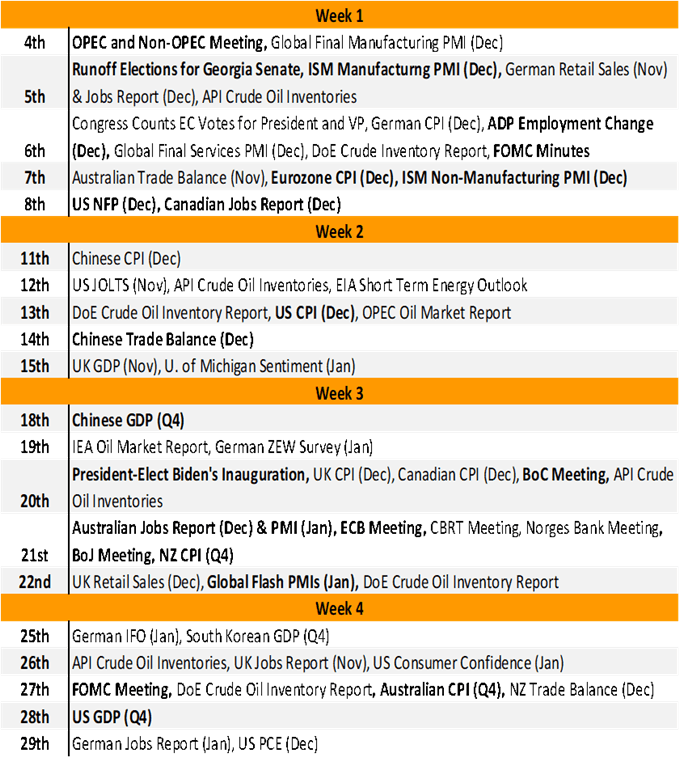