The Swiss Franc has made headway against the New Zealand Dollar so far in December. Since pivoting lower from trendline resistance earlier this month, NZD/CHF has fallen just over 3.5%. The 20-day Simple Moving Average gave way to the downside move, but the longer-term moving averages indicate the broader uptrend remains intact.

The 23.6% Fibonacci retracement level from the May-Dec major move at 0.6239 appears to be keeping downside NZD/CHF price action at bay. A move higher would likely aim for trendline resistance again before NZD bulls can progress further. However, a drop through the 23.6% Fib level may likely see the 0.6200 psychological level come into play before aiming lower. 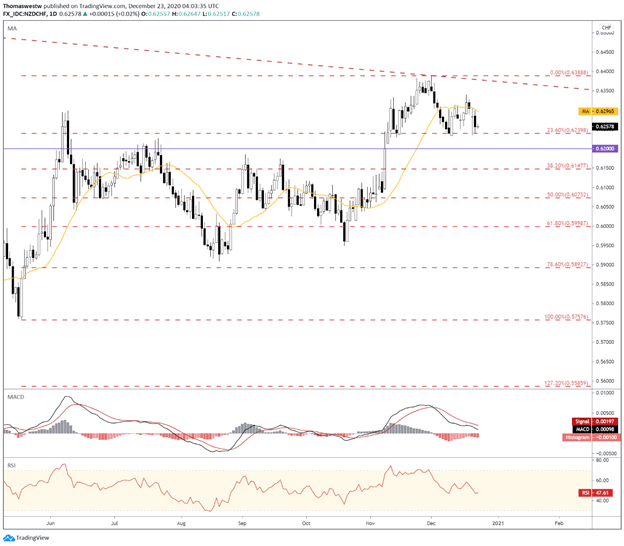 A decisive moment approaches for CAD/CHF with prices constricting within a Symmetrical Triangle. The 50- and 200-day Simple Moving Averages recently surrendered to a downside push with prices now at the lower bound of the triangle. A break beneath support with confirmation would likely see follow-through to the downside, perhaps to the 61.8% or 78.6% Fib retracement levels. A bearish Death Cross would also likely form given the 50- and 200-day SMA’s proximity and posture.

That said, prices may very well revert higher if the current support holds which would also keep the triangle in play, and likely delay the formation of the aforementioned Death Cross. The 23.6% Fib level will likely serve as an upside target for CAD/CHF bulls. In any case, the range within the triangle is quickly decreasing, and a decisive break, lower or higher, can open the door to extending the prevailing trend. 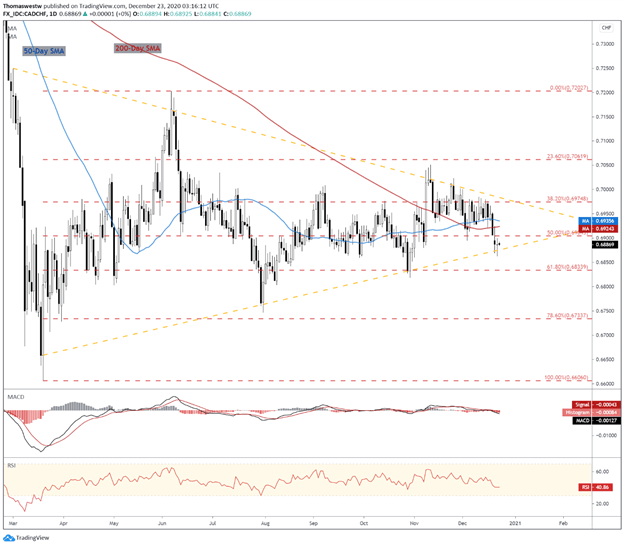 AUD/CHF recently probed its post-Covid crash 2020 highs. Prices quickly recovered from the earlier March lows and have since traded near June highs. The 23.6% Fibonacci retracement level underpinned prices during October’s move lower. AUD/CHF’s recent push to the upside failed to sustain prices above the June highs. However, the current 0.6700 psychological level appears to be offering a degree of support.

Following the recent price action, momentum appears to be calibrated for another test higher with the 50- and 200-day SMAs gyrating to the upside. The bullish case is far from certain with the MACD recently converging, and a bearish RSI divergence formed from the September to December highs. 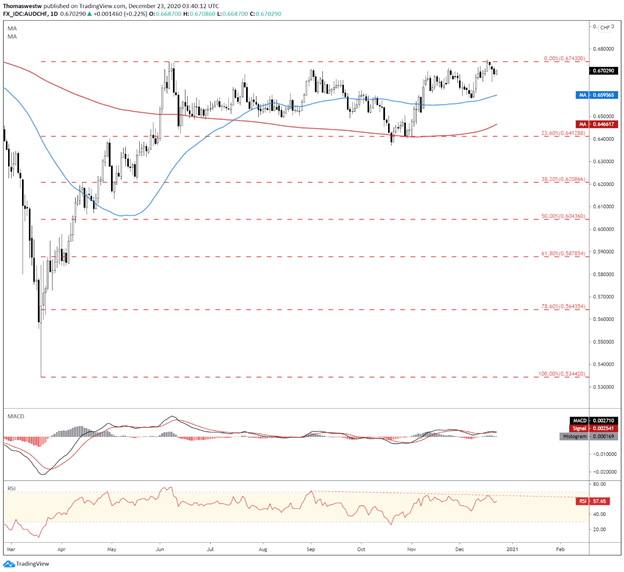