The Dow Jones Industrial Average (DJIA) came off from a six-week high as profit taking activities kicked in and corporate America unfolded their third quarter earnings results. Not surprisingly, six out of seven S&P 500 constituent companies, which released their profits on Tuesday, smashed analysts’ expectations (table below). This may set an upbeat tone for the earnings season.

Technically, the Dow Jones index has come off its six-week high of 28,950, entering into a technical correction. Given strong upward momentum observed recently, however, the Dow may regain strength after brief consolidation. The MACD indicator and a widening Bollinger band both suggest that upward momentum is prevailing. An immediate resistance level can be found at 29,210- the recent peak seen in early September. Immediate support levels can be found at 28,390, 28,040 and then 27,750.

Singapore’s Q3 GDP contracted by -7% YoY, slightly missing economists’ -6.8% forecast. The Singapore Dollar strengthened after the MAS decided to keep the rate of appreciation of the S$NEER policy band at zero percent and band width unchanged from April's level in the bi-annual monetary policy announcement today (chart below). Barring a renewed worsening of the course of the COVID-19 pandemic, the Singapore economy is expected to expand in 2021, following a recession this year. Core inflation will remain low at 0–1% next year, according to the central bank. USD/SGD fell following the MAS statement. 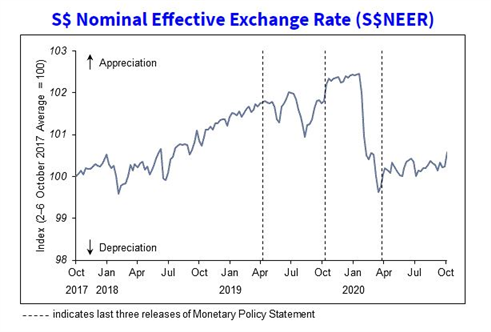 Singapore’s Straits Times Index (STI) has hit a key resistance level at 2,550 – the 50-Day Simple Moving Average (SMA) line and has likely entered into a mild correction. A slightly weaker-than-expected Q3 GDP reading may dampen risk sentiment for trading today. A strong support zone of STI can be found at 2,450 – 2,500. 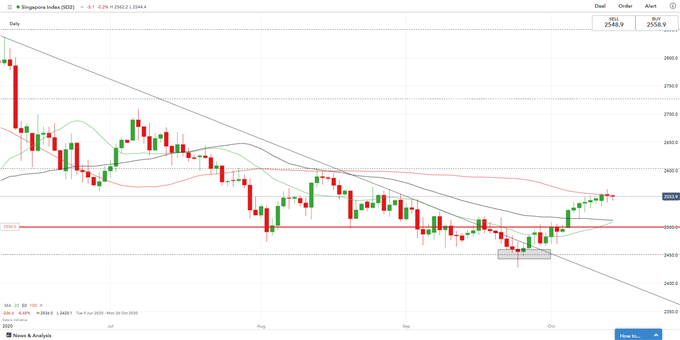 The Hang Seng Index (HSI) resumes trading today after a temporary shutdown on Tuesday due to bad weather. Mainland Chinese and Hong Kong stocks may ride the tailwind of Xi’s visit to the Greater Bay Area (GBA) this week, in which he is expected to strengthen inter-connections of China’s ‘Silicon Valley’ and stress Beijing’s willingness to opening up. As a result, technology shares may continue to outperform.

Technically, HSI has broken through an immediate resistance level at 24,450 – the 76.4% Fibonacci retracement and thus opened room for further upside towards the next resistance at 24,900 (chart below). The overall trend remains bullish-biased, as the MACD indicator suggests.